The Dirty War... It hasn't gone away, you know 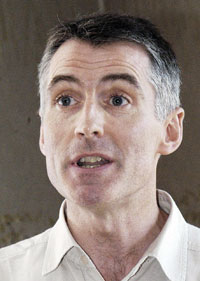 
AT the Sinn Féin Ard Chomhairle meeting on 7 March we discussed PSNI Chief Constable Hugh Orde’s call some days previously for the redeployment of British undercover soldiers in the North and the staged media leaks beforehand. The meeting was reminded that, notwithstanding the advances of the Peace Process, the shadow of the ‘Dirty War’ remains. It was a prescient reminder – some 10 hours later, two British soldiers were shot dead in Antrim.
Make no mistake about this: the impetus for that attack and the killing of a policeman in Craigavon two days later did not originate with real republicans. The clue to understanding these events stems back to the work of agents provocateurs. Their continued existence casts an ever-present shadow over the Peace Process.
But more, this stark reality poses a direct political challenge to Sinn Féin’s strategy and the struggle for national independence.
Our experience tells us that anything can happen in volatile periods such as now. Events like these and their political effects can conspire to have far-reaching consequences for republican objectives. They should not, however, be allowed to frustrate Sinn Féin’s project. Instead, we need to conduct calm analysis and continue to make careful political decisions.

THE MIX OF THE DIRTY WAR
The recent killings owe nothing to a resurgent armed struggle and everything to the machinations of the old dirty war; then add to the mix the potential for agents provocateurs.
Whatever about the pretensions of these small militarist factions, the fact is they couldn’t run a bath. They are bereft of politics or strategy, and that’s why they will never attract popular support. Their activities are entirely reactionary, geared towards destabilising the Peace Process, and incapable of producing a coherent plan to unite Ireland.
Isolated actions may come and go. It should be remembered, the track record of these factions to date has been one of killing civilians and involvement in criminal and gangland activities, North and South. But their driving purpose will remain motivated by hostility for Sinn Féin, and a self-serving militarism.
The hard facts of political struggle are that political conditions, tactics and strategy are what determine the necessity for armed actions. Hollow theological arguments from the cheerleaders of these factions don’t wash. And the recent neo-revisionist comments of SDLP spokespersons to try and assert otherwise, with regard to the IRA’s campaign, are plainly opportunistic in the circumstances.
In fact, the actions in Antrim and Craigavon sought to provoke a security crackdown, remilitarisation, and a loyalist reaction. It provided those opposed to Sinn Féin with an excuse to try and place the party under pressure and undermine the political institutions and Peace Process.
These events need to be understood for what they are, as not only anti-Peace Process but also anti-republican and counter-revolutionary. They required that the republican struggle, and by extension the aim of Irish unity, be defended by Sinn Féin. That was the correct strategic thing to do. And doing this in itself left the way open for other hostile commentators to conjure up their own latter-day civil war polemical analysis and imagery.
So what is going on?
It’s all familiar terrain, with the distinct echoes of mind games, psychological warfare, the stuff of ‘black operations’ and, behind all that, the manipulation of agents provocateurs. The shadow of the dirty war still looms.

A NEW WATERSHED
Yet this may still prove to be a watershed in the evolution of the Peace Process.
As a result of the leadership shown by republicans across the island, and by others, the Peace Process has probably been consolidated. An unpredicted common purpose steeled the institutions and political partnership held. Popular opinion rallied in a powerful consensus. And broad unionism and loyalism, with some extremist exceptions, recognised that republican commitment to peaceful, democratic and political change is unchallengeable.
Once more the leadership displayed by republicans in the interests of the common good proved that when we do so, we deliver big time. But there is more to be done.
In this particular context, republican activists need to create a new space to prove that politics are working, to ensure the Northern political institutions deliver change, to further develop the debate on modern republicanism, and, to outreach towards and intensify our dialogue with unionist communities.
We should harness this period to demonstrate again that Sinn Féin sees politics on the whole island as fundamentally about transformation and our future generations.
By their ongoing activities and the most recent killings, these armed factions have placed themselves beyond the pale. But this creates a new urgency for Sinn Féin to reach out, seek political discussion with those involved with these groups who may be sincerely, if wrongly, motivated and try to again convince them that peaceful, democratic and political options do exist.
We need to oppose the efforts of others to marginalise their members, and instead promote political engagement. Regardless of negative responses, republicans need to continue to reach out to these factions, again and again.

THE POLITICS OF TRANSFORMATION
There is a battle of ideas to be waged within Irish society and we need to be at the front, persuading, engaging and debating with our strategy and vision for a united Ireland.
The current economic recession has all the potential to create new generations of disaffected, fatalistic young people with no prospects and less hope. We have a responsibility in every part of Ireland to ensure they do not become entrapped by the nihilism of these armed factions.
The alternative has to be Sinn Féin’s politics of transformation. These new generations have to see that politics work and offers them a stake in society. Whether in the South or North, Sinn Féin has to ensure that these young people see the relevance and value of this republican strategy.
All this dovetails with our determination to forge an alliance for change in the 26 Counties. There has never been a greater need for a national political alternative. And the bedrock to achieving it must be to maximise political unity across the greatest spectrum of republican, nationalist and progressive, democratic opinion.
Economic recessions can breed despair and an alienation from political ideas. In Ireland today, this can become fertile ground for those in the establishment who see the potential to thwart change and reorganise the status quo and the agents provocateurs within these armed factions, whose actions support those opposed to real change in society. But that is only if we let them get the upper hand.

NEW HORIZONS
Sinn Féin has to stop that happening. We need to protect the integrity of hope and defend the politics of transformation.
We’ve got to demonstrate that new political and economic horizons are attainable. That means acting as agents of change, nationally and locally, and always seeing the bigger picture and encouraging others to do likewise – by being sure-footed, leading by example, and by being prepared to take on the reactionaries within or outside the Establishment.
It’s a time for proactivite engagement with and outreach to those who oppose Sinn Féin, both within nationalism and unionism. Now is a time to convince more citizens, North and South, that republican values matter and republican politics can make change.
We will ensure new horizons come into focus if all republican activists bring forward new politics, energy and ideas and continue setting new standards of political leadership for this period of politics in Ireland.