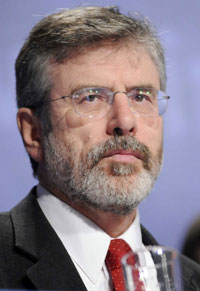 SINN FÉIN hit out this week against the detention of people by the PSNI for questioning beyond seven days.
A total of 11 people have been held in custody in the North in connection with the deaths of a PSNI officer and two British soldiers earlier this month.
Two people were held by police investigating the murder of PSNI officer Stephen Carroll since 10 March.
Speaking on Monday before the PSNI charged two people with the murder of Stephen Carroll, Sinn Féin President Gerry Adams repeated the party’s demand for those detained by the PSNI for periods beyond human rights best practice to be either charged or released.
“There are currently a number of people, including a 17-year-old juvenile, being detained by the PSNI for periods extending beyond human rights best practice. This is not acceptable. They should either be charged now or released”, Adams said.
“Regardless of what activity anyone is suspected of being involved in, they have the right to basic human rights protections. If there is evidence which exists against somebody, then that person should be charged and the evidence put before the courts. If no such evidence exists then that person should be released. That is the democratic standard which must be adhered to”, he added.
Earlier in the week Sinn Féin spokesperson on policing issues Alex Maskey said Sinn Féin opposed the detention of people by the PSNI for questioning beyond the existing seven days.
“If confidence is to continue to be built in policing and the good work of recent years consolidated, then it is crucial that the PSNI demonstrate a willingness to uphold the highest standards of human rights protections.”
Speaking about the continued detention of suspects in relation to the killing of Carroll and that of two British soldiers at Masserene Barracks in Antrim on 7 March.
“Regardless of who is involved or what they are suspected of doing, Sinn Féin has consistently opposed the detention of suspects beyond the existing seven days. We have repeated this position to the British Government in recent days.”