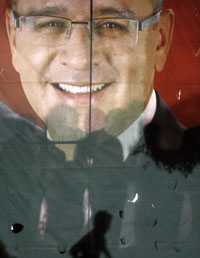 FOR 12 years between, 1980 and 1992, the streets and hills of El Salvador in Central America ran red with blood as it endured a vicious civil war that claimed 75,000 lives and displaced thousands more. On 15 March last, its towns and villages were once again submerged in red, but this time it was the crimson banners, flags and T-shirts of the FMLN that provided the colour.
The FMLN’s popular candidate, Mauricio Funes, a 49-year-old former journalist and broadcaster, emerged victorious from El Salvador’s presidential campaign.  He secured 51.3 per cent of the vote compared to 48.7 per cent gained by his opponent from the right-wing ARENA party, Rodrigo Ávila. The latter was a former police chief and protégé of outgoing President Elias Antonio Saca. He was also a former army sniper who killed FMLN Marxist guerrillas during the uprising and is a vocal supporter of the now deceased Roberto D’Aubuisson, the infamous founder of ARENA who commanded death squads responsible for the torture and slaughter of thousands.

GROUND-BREAKING
The election of Funes is ground-breaking in that not only does it end the 20-year dominance of ARENA but it also shatters the 130 years of military and oligarchic rule of El Salvador.
Funes inherits a country virtually bankrupted by the right-wing. ARENA privatised the country’s banks, pension system and telephone and electricity companies. The cost of basic foodstuffs have spiralled out of control and gang violence is a serious problem.
Wealth distribution is shameful with the share of income held by the top 10 per cent more than 57 times higher than the share held by the bottom 10 per cent. The precarious economy relies on the significant remittances sent home by the 2.5m Salvadorans in the US, some $3.7bn last year, the equivalent of one-fifth of the country’s GDP. El Salvador is one of the poorest countries in Latin America with 40 per cent of its population struggling to exist on $2 per day.

SHERATON HOTEL
In 1989, the Sheraton Hotel in the capital, San Salvador, was the venue of one of the most famous battles of the war, where left-wing FMLN guerrillas battled right-wing-controlled soldiers floor by floor. Twenty years on, it was in the same hotel that the FMLN’s Funes delivered his victory speech.
Funes showed caution with a conciliatory oration, emphasising the need for national unity, safe change and stability. He even pledged to keep his country in the Central American Free Trade Agreement and to retain the dollar as their currency. Although the FMLN became El Salvador’s largest political force last January, gaining 35 seats in the legislative election, the right-wing coalition possess 43. As neither grouping has enough to secure a two-thirds majority required to pass important legislation, compromise is a necessity.

BACKGROUND
For those on the right, Funes is no more than a popular figurehead who will be controlled by the communist hardliners in the FMLN. To critics on the left he is a moderate and opportunist. Funes is an open admirer of Brazilian President Lula (his wife Vanda Pignato is a Brazilian who represented Lula’s Workers’ Party in El Salvador).
Funes is the first FMLN candidate with no guerrilla background, although he lost his brother to Government forces and subsequently interviewed FMLN revolutionaries during the war. He stated that he wants to “end privilege for the few” and that “the time has come for the excluded, the opportunity has arrived for genuine democrats, for men and women who believe in social justice and solidarity”.
He also aspires to crack down on tax evasion and corruption and implement policies to help the poor. His right-hand man is new Vice-President Salvador Sánchez Ceren, a former FMLN guerrilla commander, and they will assume presidential office on 1 June for a five-year term.

OBAMA REACTION
In a notable shift in US foreign policy, the Obama administration in the United States promised to work with whoever was elected El Salvador’s new president, in stark contrast to the Reagan government who ploughed $7bn into attempting to crush the FMLN over a ten-year period and prevent the spread of “evil communism”.
Five years ago, former President George W Bush threatened to stop US aid to El Salvador in the advent of a FMLN victory as a continuing show of US support for ARENA, who reciprocated by sending 6,000 Salvadoran troops to Iraq, the last few of whom have just recently returned.

POIGNANT
It is rather poignant that Funes won the presidency by 75,000 votes, the same number of people who lost their lives in El Salvador’s bloody conflict.
With Funes and the FMLN, El Salvador now at last has a definite sense of hope after decades of arduous struggle and sacrifice in its quest for social justice and an end to repression.
The current political context would not have been achieved without the bravery and selflessness of those Salvadoran freedom fighters that died. Let their deaths not be in vain.
Viva el FMLN y el pueblo salvadoreño!