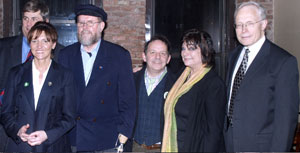 THE tenth anniversary of the assassination of Lurgan civil rights lawyer Rosemary Nelson on 15 March was marked in New York with an anniversary Mass by the Brehon Law Society and the Irish community in St Patrick’s Cathedral.
The Mass was celebrated by Monsignor Thomas Leonard, Pastor of Holy Trinity Church in Manhattan, and there was a scripture reading by civil rights activist Brendan Fay in Irish and in English by Fr Michael Lapsley, an Anglican priest and anti-apartheid leader from South Africa. A survivor of a would-be assassin’s bomb, Fr Lapsley did lose both hands and an eye in the attack because of his fight for justice in South Africa. He is internationally known for his work in post-conflict peace and reconciliation and he spoke about Rosemary Nelson’s legacy in human rights work.
Event organiser and Brehon Law Society leader Mary Elizabeth Bartholomew said Rosemary, who was an Irish-speaker and ecumenical in outlook, would have been pleased.
Others attending included Steven McDonald and his wife, Malverne Mayor Patti McDonald; Brehon Law leader Cody McCone; Barbara Flynn and Seán Cahill of the Irish Parades Emergency Committee (IPEC); and retired US General James P Cullen, a leading international attorney advocate against torture.
A reception afterwards at Hugh O’Lunney’s Bar & Restaurant in Times Square featured an evening of song, stories and film recalling Rosemary Nelson’s courage, fearlessness and dedication to human rights.
A video interview with Rosemary on her work as solicitor for the besieged Garvaghy Road community was introduced by film-maker Eileen Clancy of Irish Parades Emergency Committee (the film clip can be viewed at https://www.youtube.com/watch?v=-BKP5YQkpzQ).
Derry Sinn Féin MLA Martina Anderson spoke about Rosemary’s life, her own experiences as a prisoner and the current Peace Process.

MARY ROBINSON
Former President of Ireland Mary Robinson sent a message, read by event organiser Leslie Cassidy. Mary Robinson recalled how, in September 1998, less than six months before she died, Rosemary Nelson testified in Washington before the House Committee on International Operations and Human Rights in the North of Ireland. In addressing the committee, Rosemary Nelson said:
“I believe that my role as a lawyer in defending the rights of my clients is vital. The test of a new society in Northern Ireland will be the extent to which it can recognise and respect that role and enable me to discharge it without improper interference. I look forward to that day.”
Mary Robinson, a former United Nations High Commissioner for Human Rights, added her own words of admiration for the Lurgan lawyer:
“Rosemary was a symbol of steadfast courage and of dedication to her role as a lawyer. We must work to try and ensure that the very simple yet challenging test she outlined to the House Committee becomes a reality in all societies. We owe her that.”
New York City Council Speaker Christine Quinn also sent a message of tribute.

BREHON LAW SOCIETY
Rosemary Nelson was a friend to many in the Brehon Law Society, some of whom testified at the inquiry into her death. On behalf of her legal colleagues, Mary Elizabeth Bartholomew said:
“Rosemary Nelson confronted the corruption that she encountered. Her example continues to inspire us. Let us construct in Rosemary’s memory a most fitting memorial, namely forging real reform in policing and the administration of the law so that counsel shall never again lose their lives in Northern Ireland for simply doing what any just society demands of them.”
Ed Lynch, founder of the Lawyers’ Committee for Peace and Justice in Northern  Ireland, and General Jim Cullen recalled that many who knew Rosemary before her murder were concerned because of the threats to her originating with state forces and how these concerns were effectively ignored by those in authority.
Tributes and stories recalled Nelson’s life as a solicitor dedicated to human rights, her work on women’s rights, with the Traveller community and against discrimination in the workplace.
She was an advocate of the Irish language and was well-respected for her day-to-day legal work with all communities around Lurgan and Portadown.
Seán Downes recalled her visit to Washington where she testified on human rights but more especially he recalled the more relaxed Rosie Nelson – a warm, personable Irishwoman, devoted wife to Paul and mother to Gavin, Christopher and Sarah – who enjoyed relaxing and dancing with family and friends.
An Phoblacht
44 Parnell Sq.
Dublin 1
Ireland