Report of Consultative Group on the Past deeply flawed - Adams 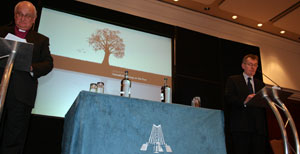 SINN FÉIN President Gerry Adams has said that the recent process unveiled by the Consultative Group on the Past is deeply flawed and incapable of establishing an Independent International Truth Commission that Sinn Féin believes is necessary.
He said he believed that the proposal for a legacy commission, included in the Eames-Bradley report released earlier this year, “fell far short of what was required”.
Adams said the British Government could not be the facilitator of any truth recovery process, nor could it write the brief for any other group to do so.
The Sinn Féin President said the issues surrounding the legacy of the past deserved the widest public discussion. He was addressing a public meeting  in West Belfast organised by groups including the Falls Community Council, Relatives for Justice and Coiste na nIarchimí, which represents thousands of former republican prisoners.
Referring to meetings he facilitated on the issue of truth and justice between victim families and the British Secretary of State Shaun Woodward, Adams said:
“The first was with Hugh Jordan, the father of Pearse Jordan, who was shot dead by the RUC in November 1992, and whose family have been battling ever since for a proper inquest and full disclosure from the British state.
“The second was between Mr. Woodward and the Ballymurphy Massacre Committee. These are the relatives of 11 people, ten men, including a local priest, and a mother of eight children, who were shot dead by the British Parachute Regiment in the Ballymurphy area in the 36 hours after the introduction of internment in August 1971.
“At both of these meetings the families gave graphic and moving accounts of the brutal killings of their loved ones and of the subsequent cover-up by the British state into the events surrounding their deaths.
“These families are only a few among many hundreds of others who also seek the truth about the circumstances surrounding the deaths of loved ones and friends and neighbours. They are not alone.
“Campaigning groups like Relatives for Justice, Justice for the Forgotten, the Pat Finucane Centre, An Fhirinne, Firinne and the Ardoyne Commemoration Project are making similar demands.
“Also across this island and in Britain there are other families involved in campaigns. Some of these are victims of republican actions who are also seeking truth.
“The issue of state killings and of collusion – which was an administrative practice and part of the British Government’s strategy – must also be dealt with. The evidence of the British government’s inadequate and dishonest response to demands for truth has raised understandable concerns about its commitment to a viable and effective truth recovery process.”
Adams said the British Government’s refusal to co-operate with the Barron Inquiry into the Dublin and Monaghan bombings or to hand over files in relation to the killing of Pat Finucane and others as well as its obstruction of the Saville Inquiry, are evidence of an unwillingness on the part of the British state to end cover-ups and to take responsibility for its actions during the conflict.
He went on to say:
“The publication of the ‘Consultative Group’ report on 28 January  brought a renewed focus onto the issue of truth and truth recovery. Sinn Féin is currently engaged in a consultation on the detail of the report. However, sometime ago Sinn Féin made it clear that the establishment of an independent and international commission established by a reputable international body like the UN is necessary to properly address this issue.
We don’t believe the recommendations of this report are sufficient to establish such a body. The appointment by the British Government of a Legacy Commission as proposed by this report falls very short of these fundamental criteria.
“In Sinn Féin’s view a proper and transparent truth process is essential and in 2003 we published a discussion document which identified fundamental principles which we believe are essential to such a process of truth recovery.

These are:
•    All processes should be victim-centred and deal with victims on an all-Ireland basis and indeed with victims outside Ireland;
•    Full co-operation by all relevant parties is essential to the success of any commission;
•    There should be no hierarchy of victims;
•    All processes should be politically neutral;
•    Any future panel should be international and independent;
•    One of the purposes of any future panel/commission should be to examine the ‘causes, nature and extent’ of the conflict
•    An objective of any process should be healing – both for direct victims and for society in general
•    A common aim should be to enable society to build the peace; Reconciliation should be the core aim of any truth process; and respect and generosity should inform the parties seeking to reach agreement.

Given that the British government was the major protagonist in the conflict, Gerry Adams asked: “How can bereaved families or those seeking truth and justice, feel anything other than deep concern at the process that is being proposed by the Eames/Bradley Group?
“The British Government cannot be the objective facilitator of any truth recovery process. It also cannot with any honesty write the remit of any group tasked with that role. Any truth process which has the finger prints of the securocrats in Whitehall anywhere near it simply will not work. History shows that their contribution has been one of cover-up and concealment.”
He said objections to a truth process based on arguments about the cost of inquiries were disingenuous.
“It is not inquiries into the past which cause the expense – it is the British government policy of concealment and cover-up, most clearly demonstrated in the Saville Inquiry into Bloody Sunday, which has seen that Inquiry last and cost as much as it has”, he said.
Adams said Sinn Féin is convinced that the establishment of an Independent International Truth Commission is the best way of taking the issue forward.
“The process unveiled by the Consultative Group on the past is therefore deeply flawed and incapable of establishing the Independent International Truth Commission which we believe is necessary” he said adding:
“Of course, this does not mean that we give up. The Eames/Bradley proposals need to be thoroughly discussed by bereaved families, as well as by society generally.
Having spoken to many families over the years I know that they realise that achieving truth is not going to be easy. There are vested groups who do not want the truth and who will seek to thwart the creation of a meaningful truth recovery process. We must not let them. We must persevere.
Sinn Féin supports the bereaved families and that support will remain steadfast in the difficult time ahead. Looking after victims and victims’ families and survivors is a significant and important part of this.”
An Phoblacht
44 Parnell Sq.
Dublin 1
Ireland