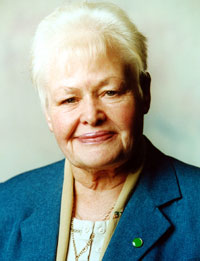 TRIBUTES have followed the sad news of the death of Marie Moore. Marie, a lifelong republican, died at the weekend following a long illness. Sinn Féin President Gerry Adams was one of the first to express the sense of loss felt by the many people who knew Marie personally and the many more whose lives she had touched. Extending his condolences to the family, Adams said Marie will be deeply missed.
“Marie Moore will be deeply missed by the republican people of this city and the many who would not share her politics but who found in her an outstanding activist for citizens’ rights and, in particular, the rights of women,” said Adams.
“I spent some time with Marie just a week ago, the night before going to the USA, and although she was obviously very ill, she was in great form. She remained very staunch in good times and bad and she was very supportive of me and I will miss her slagging and her craic as well as her activism.”

Marie, sometimes by accident but more often by design, often found herself at the epicentre of political struggle

As a lifelong republican, Marie Moore not only witnessed the historic events of her time but also, as a committed activist, played her part in shaping them. Indeed, Marie, sometimes by accident but more often by design, often found herself at the epicentre of political struggle.
Her baptism, at the tender age of six, into the political turmoil that would characterise the Six Counties for most of her lifetime was both brutal and abrupt.
As a child in her grandmother’s home, she had watched the bloodstained body of Tom Williams being carried upstairs. And only a few moments later she had a gun put to her head by an RUC officer threatening to kill her if Williams and his comrades didn’t surrender.
During the Civil Rights Movement, Marie faced the ferocity of the RUC, B-Specials and later the British Army on Bloody Sunday as they sought to terrorise peaceful marchers demanding the right to vote, a job, a house.
In the summer of 1969, when loyalist mobs, backed by B-Specials, attacked the Clonard area of west Belfast, Marie and other members of Sinn Féin and the Fianna republican youth movement repeatedly came under fire as they helped evacuate terrified Catholic families from Bombay Street and other vulnerable areas.

In 1969, Marie and others repeatedly came under fire from loyalists as they evacuated terrified Catholic families from Bombay Street

When the British Army imposed a curfew on the people of the Lower Falls in 1972, Marie Moore, together with Máire Drumm and others, mobilised hundreds of women in Andersonstown to challenge the might of the British Army and end the siege.
Marie was one of a number of women shot by the British Army during street protests challenging occupation. Marie survived but a number of female activists were killed by either British or pro-British forces.
Working in the POW Department during the struggle around political status, Marie organised and maintained a system of covert communication between republican prisoners and the movement outside.
Maintaining communications throughout the Blanket and No-Wash protest and subsequent Hunger Strikes was a massive logistical task that once again placed Marie at the cutting edge of the struggle.
Within Sinn Féin, Marie held a number of important posts, including roles within the Women’s Department and Gerry Adams’s constituency office as well as serving as a member of the Ard Chomhairle.

As a mother of three, Marie understood the difficulty of being politically active and running a household and family at the same time but she remained adamant about the importance of women becoming involved not only in campaign work but also within party structures. During a recent interview, Marie urged women’s empowerment through participation. “Decisions are made by those who turn up,” Marie said.
Elected to Belfast City Council in 1993, Marie became a Sinn Féin councillor at a time when unionist domination within local government was being challenged. During council meetings, unionist councillors routinely blew whistles and hurled abuse whenever Sinn Féin councillors spoke in the chamber.
Marie remained undaunted and in 2000 made another bit of history by becoming the first Sinn Féin woman to be elected as deputy Mayor of Belfast.
Expressing his condolences, the current mayor, Sinn Féin’s Tom Hartley, said:
“Marie Moore was a dedicated representative of the people, not only of her own community but the whole of Belfast and she worked tirelessly for her constituency and always with diligence and dedication.”
Fellow Councillor Fra McCann said Marie was a highly-respected republican who had fought hard to represent socialist and working-class values.
“I knew Marie for many years and I held her in very high esteem and she will be missed by the whole republican family.
“She was in touch with the issues concerning her constituents and she was well-known and respected throughout west Belfast.
“Marie’s input and presence in the council will be sorely missed.”

WE WERE THERE: Marie at the launch of the Bobby Sands Trust website with Danny Morrison, ‘Bik’ McFarlane, Gerry Adams, Jim Gibney and Carál Ní Chuilín