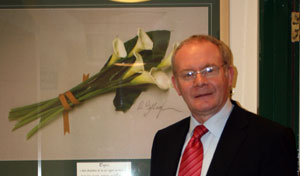 SINN FÉIN Foyle MLA Raymond McCartney launched the annual Easter Lily campaign in Derry this week
McCartney said that he was very pleased to have been asked by the Derry Republican Graves Association to launch the annual distribution of the Easter Lily throughout the city
“I am also heartened by the enthusiasm of the young people present here today from Ógra Shinn Féin and would like to congratulate them for their efforts over recent years in ensuring that the tradition of wearing the lily during Easter is past on to the next generation”, he said.
McCartney said he would encourage as many people as possible to wear the lily to “remember with pride our friends and comrades who have given their lives in pursuit of our republican ideals and goals”.
Easter Sunday is on 12 April this year. Details of Easter republican commemorations throughout the country’s will be featured in An Phoblacht in the coming weeks

ENTHUSIASM: Ógra members have ensured the tradition of wearing the lily is passed on to the next generation