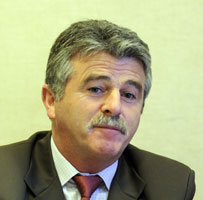 MORGAN: Called for state intervention to to save private sector jobs

DELIVERING Sinn Féin’s pre-Budget statement in the Dáil on Tuesday, Finance spokesperson Arthur Morgan TD called for state intervention to save private sector jobs and a Criminal Assets Bureau investigation into Irish Nationwide building society.
Morgan stressed that the economic crisis has been caused not by international factors but by the policies pursued by Fianna Fáil-led governments for over a decade.
“It has been stated that no one shouted ‘stop’. That is not correct. Many people shouted stop and we in Sinn Féin were among them. We pointed out that the property boom was unsustainable and it was a recipe for disaster for the Government to rely on that bubble for so much of its revenue. That fundamental policy failure lies at the root of the crisis in our public finances.”
The Government rushed an emergency Budget in October without having a clear picture of what was going on in the economy and this led to more disastrous decisions.

While billions of euro of taxpayers’ money have been poured into our banks, our beloved senior bankers are getting away with more embezzlement
— Sinn Féin TD
Arthur Morgan

“The Government obeyed its conservative reflex and lashed out at public services, cutting health and education and then imposing the so-called public service pension levy, which is really a levy on public service,” Arthur Morgan said.
“The Government succeeded in bringing older people, students and organised workers out in numbers not seen on our streets since the anti-Iraq war march of 2003, the Hunger Strikes of 1980 and 1981, and the tax marches of 1979.”
The Louth TD said the blame for industrial unrest lay squarely at the Government’s door. He called on the Government to engage with unions and commended the ICTU’s 10-point plan for economic recovery, There is a Better, Fairer Way.
Morgan said that since Finance Minister Brian Lenihan’s inflamous declaration of “the cheapest bail-out in the world”, he had made one blunder after another in a fundamentally-flawed strategy to save the banks.
Morgan continued:
“Each time you intervene. Whether it is through recapitalisation or nationalisation, you tell us that this latest measure will be enough. And while all these schemes have poured literally billions of euro of taxpayers’ money into our banks, our beloved senior bankers are getting away with more embezzlement.
“It is simply incredible that while the Government was in the process of guaranteeing Irish Nationwide, Michael Fingleton was collecting a million-euro bonus. He has used Irish Nationwide for well over 30 years as his own personal bailiwick. Dominating the Nationwide board of directors in the way that he did, Fingleton’s million-euro bonus and €26m pension was basically Fingleton ordering himself to pay himself money.
“A number of weeks ago, when the evidence of Anglo Irish Bank cooking the books surfaced, I called for the Criminal Assets Bureau to investigate that bank and I am this evening calling for a CAB investigation of Irish Nationwide.
“While one scandal after another is surfacing from our corrupt banking institutions, there is still no clear evidence that the Government are reforming corporate governance. It is corporate governance that is crucial in restoring confidence in our banking system.
“It is evident now that banking institutions without radical intervention are in terminal decline. If the Government does not intervene in the form of nationalisation our banks are finished and a number of SMEs and family homes are finished as well.
“The €4.7bn – or possibly €5bn – which is being sought will mean nothing if another 300,000 people are laid off by the end of the year. Because of your obsession with cutbacks and our doomed zombie banks, jobs are being lost and thousands of workers are being cut back to two days a week. You have done basically nothing to stop this crisis and you seem to be almost suffering from shock.

“Yesterday, we launched a jobs retention and creation strategy so that we can stop the tsunami of unemployment which is sweeping across this country. We have called for a €300m fund to subsidise jobs in SMEs because our view is that it’s better to use public money to keep people at work rather than to keep people at home. The Taoiseach is going to have to give serious consideration to state intervention in the private sector to save private jobs. We also need increased investment in our schools and public transport.
“A couple of weeks ago, you opened up the Pension Reserve Fund to continue your never-ending bail-out of our banks. Well why can’t you actually do something useful for once and actually use the Pension Reserve Fund to finance critical infrastructure projects? Jobs can only be created through increased investment, not through cutbacks.

Jobs can only be created through increased investment, not through cutbacks

“It’s time for the Taoiseach to intervene. And it’s time for the state to empower our SMEs to keep their workers at work.”
Meanwhile, Sinn Féin held a protest outside the headquarters of Irish Nationwide in Dublin, where activists enacted ‘The Greedy Pig’ leaving the Irish Nationwide head office with bags of cash.
South Dublin Sinn Féin representative Shaun Tracey called on Brian Lenihan to ensure that Michael Fingleton is made to give back the €1m bonus he received last November and to instruct the bank to impose a cap on its pension arrangements with employees.
He said that if Irish Nationwide is not prepared to enforce strict corporate policies and rein in senior executive pay, then they should be removed from the Government bank guarantee scheme.