Time for action on jobs 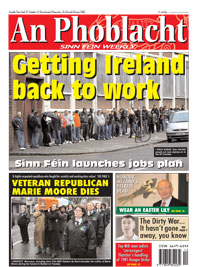 GETTING Ireland back to work while reshaping the economy so we have the infrastructure, skills and public services that will deliver an improved quality of life for all – that’s the core of Sinn Féin’s new job-creation strategy launched this week.
The need for a more effective job-creation strategy, with an all-Ireland dimension, has been at the core of Sinn Féin thinking for more than five years. In both the Assembly and Leinster House teams, considerable effort was put into the project, culminating in the adoption a new enterprise strategy at the 2006 Ard Fheis with the policy focus permeating Budget submissions, statements and party campaigning.
Yet, in the later years of the Celtic Tiger boom, the Irish Government was prepared to ignore the cracks in its own strategy, such as the mis-spent billions on job creation, the decline in enterprise agency-backed jobs, or the substantial and growing section of the workforce who were unskilled, unqualified and who would be the first causalities in any economic crisis.
By September 2008, as the Leinster House team thrashed out their approach to the early Budget, the discussion kept coming back to the question of a government job-creation strategy. Where was it?
In the intervening months, the group led a discussion across the party, encompassing TDs, MLAs, councillors and area representatives that led to Sinn Féin’s Getting Ireland Back to Work document.
At the core of the strategy is the need to retain and create jobs. Sinn Féin proposes a three-year plan to hold on to or create replacements for the 1,000 jobs a day that are being lost.
For example, it is clear that house building will never return to the levels seen in the last five years and thousands of construction workers face long-term unemployment. But we can triple the number of primary schools being built. We can act on the 900,000 homes that have no insulation and begin an even wider retrofitting scheme, introducing new green technologies such as solar power and low-cost heating systems into all Irish households and businesses.
We can examine the €4bn budget for third-level, FÁS and the VECs to formulate a new education and skills strategy that could retrain tens of thousands of Irish workers who have left school with no formal qualifications.
These are just three of the more than 80 practical, thought-out proposals in the Sinn Féin strategy, some of which are summarised here.

JOB RETENTION
In terms of key action proposals, the core elements of the job-retention strategy are:–
1     Establish a €300m jobs retention fund to subsidise workers in small and medium enterprises (SMEs) struggling to keep on their employees. The fund should be time limited and implemented with an increased Revenue and Labour Inspectorate.
2     Set up a body to actively pre-empt job losses in companies where jobs are in jeopardy to troubleshoot and offer advice.
3     Ensure small businesses can access credit and establish a state bank that would have this as one of its aims.
4     Reduce the costs of doing business – stealth taxes, ESB, etc.
5     Ensure access to high-speed, low-cost broadband.
6     Boost the agri-food sector by introducing an improved country of origin labelling system.

JOB CREATION
1     The National Development Plan’s immediate priority should be providing essential labour-intensive infrastructure, prioritising investment in where we can compete on the international stage (i.e. renewable energy).
2     A minimum of 150 school-building projects should enter the architectural and planning stage each year.
We propose an increased building and refurbishment programme from late 2009 through to 2013 that would aim to take a further 125 schools through construction by end 2010, and at least 125 each year between 2010 and 2013.
3     Full implementation of the promised €252m in NDP funding for introducing ICT, broadband and digital media into primary schools.
4     Expand the national insulation programme to cover 100,000 homes by the end of February 2010 and 150,000 in subsequent years, creating the potential for 12,000 jobs by the end of 2010.
5     Adjust local authority and public sector construction service and procurement contracts to create a level pitch for small businesses to tender.
6     Fast-track business start-ups – create one-stop enterprise business points to bring together funding, expertise and advice for entrepreneurs who want to start or grow a business.
7     Create a Sales Ireland strategy to help Irish firms access export markets outside the US and Britain.
8     Establish, within a calendar year, Eolas Glás Éireann, led by Sustainable Energy Ireland, a new green technology body for research, promotion and funding of green energy and environmental technologies. The core aim is to develop Ireland as a world leader in green and alternative energy technologies.
9     A major drive to attract foreign direct investment from international firms in the renewable energy sector should also be launched.
10     Fast-track and expand the promised €200m currently earmarked for R&D into alternative energy under the Science Technology and Innovation Fund.
11     Support for Irish manufacturers and producers to reach economy of scale, through investment in new technology and production methods.
12     Support for Irish firms and entrepreneurs looking to set up manufacturing businesses with the potential to compete with our largest imports, including R&D funding.
13     Support for Irish business to access export markets outside the US and Britain, including language and local regulation support, and increased use of Irish embassies to access local market knowledge and management personnel.
14     A review of the current sell-by date regulations which allows importers to avail of the same sell-by date as domestic producers.
15     Tax credits for multinational corporations (MNCs) which source Irish goods as opposed to importing.

EDUCATION & TRAINING
FÁS, the VECs and third-level institutions need to have a joined-up approach to ensure that we are training people for sectors that will provide jobs in the coming decade.
1     Bring forward proposals for a ‘GI type’ bill in Ireland for redundant workers and those signing on where they would have fees waived and keep social welfare benefits while studying.
2     Launch a drive to get early-school-leavers back into second-level education.
3     Create a scheme to get the ‘redundant professions’ back into third-level education.

STIMULATING CONSUMER SPENDING
1     Harmonise VAT across the island over an agreed period.
2     Ensure reductions in oil prices are passed on immediately to individual consumers and businesses and that energy suppliers’ billing (ESB, etc) is continually reviewed
3     Create a cost of living package aimed at reducing the amount spent on basic living expenses such as public transport and domestic fuels.
4     With European Central Bank rates falling, allow households on relatively high-interest fixed mortgages to refinance to a lower fixed rate without penalties.
5     Empower the Minister for Enterprise to have a rapid reaction price force, ensuring price reductions are passed on to consumers, particularly in the areas of fuel and retail groceries.