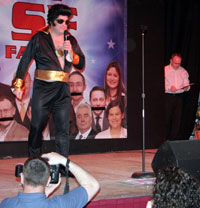 AS A FOLLOW-UP to the 2007 SF Factor competition, Dublin Sinn Féin is holding an even more elaborate fund-raising event this year – Sinn Féin’s Got Talent.
Various election candidates will display their previously-hidden talents as singers and entertainers. There will be two heats in the lead-up to the final contest, one for Dublin South, which will be held on 17 April, and the other for Dublin North, which will happen the next night.
The real deal will happen on 1 May when the finalists will battle it out for the title. Last year’s winner, Aengus ‘Elvis’ Ó Snodaigh not only left the building with the €1,000 prize but with a heap of publicity when the media picked up on the story.


‘THE KING’
Aengus ‘The King’ (Can you have a republican king  – Ed?) says:
“It’s a fun event along with being an election fund-raiser for the local elections this year,” Aengus says.
“Money comes from votes bought by the audience and the ultimate prize goes to the winning candidate’s election team. It’s also a way of profiling the candidates and, more importantly, the event is a good way for activists in the various areas to bond.
“The €1,000 prize we won last year was a great help and it’s an imaginative way of creating funds. I won’t get to contest this year’s event as it’s only for councillors but either myself or Elvis might make a guest appearance. Both of us have been known to do stranger things!”
An Phoblacht
44 Parnell Sq.
Dublin 1
Ireland