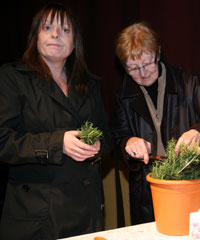 Rosemary Nelson who was assassinated by loyalists near her Lurgan home on 15 March 1999 was remembered in a moving commemoration held in An Culturlann MacAdaim O’Fiaich last Sunday 8 March.
The commemoration, held on International Women’s Day, saw up to 60 people – some of whom travelled from Portadown’s Garvaghy Road – remember Rosemary and her work.
Eileen Clancy, one of many observers who travelled from the United States  at the height of the marching season and witnessed how the then RUC abused Rosemary spoke at the ceremony.
Clancy described Rosemary as a brave and courageous woman who inspired those around her.
Other speakers included Patricia McKeown of the Trade Union Unison and Clara Reilly of Relatives for Justice.
An Phoblacht
44 Parnell Sq.
Dublin 1
Ireland