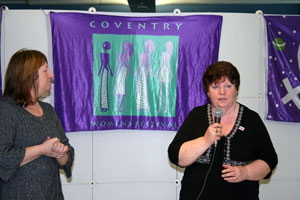 THE Ballymurphy 11 were murdered during the first three days of internment by the 2nd Battalion of the British Army’s Parachute Regiment. This same regiment went on, six months later, to murder 14 civilian demonstrators on Bloody Sunday in Derry.
Two daughters of the Ballymurphy 11 were in Birmingham and Coventry for International Women’s Day events from Thursday to Sunday, 5 - 8 March. They were the guests of Coventry Trade Union Council and the Troops Out Movement. Alice Harper is the daughter of Daniel Teggart, father of 13, murdered on 9 August. He was shot 14 times. Briege Voyle is the daughter of Joan Connolly, who was also murdered on 9 August. She was the mother of eight, shot whilst helping another victim, Noel Phillips, aged 19.
All the victims were labelled by the British Army as terrorists with guns. There is not a scrap of evidence to support this. All of the victims were unarmed civilians and the relatives want truth and justice, not vengeance.

TRADE UNION COUNCIL
The first engagement for the guests was with the Birmingham Trade Union Council. They were the main speakers at the monthly delegates’ meeting. The council will be writing to Secretary of State Shaun Woodward, supporting the campaign’s demands:–
•    An independent international public investigation
•    A statement of the innocence of those killed
•    A public apology from those responsible

The evening was spent as guests at Birmingham’s meeting of  Britain Palestine Twinning Network Women’s Visit. The main speakers were Palestinian women Zahida Farakhnah and Nagham Madi.
Saturday was a very full day, including platforms at the launch of Coventry’s Women’s Festival, a special meeting of Coventry Trades Union Council called in honour of the Ballymurphy 11, and the International Women’s Day event at Birmingham’s Drum, Black Arts Centre.
The final event on Saturday was a dinner and musical entertainment in support of Music for Hope, a Birmingham-based charity which provides communities in El Salvador with musical instruments and pays the salaries of five music teachers. Alice & Briege were the interval speakers. Again they received a tremendous reception with pledges to support the campaign.

ARMED FORCES MINISTER
During a meeting with local activists in Birmingham on International Women’s Day itself, there were proposals to put pressure on Bob Ainsworth, Britain’s Armed Forces Minister, to make his department’s papers available to relatives. Someone in the British Army and Government knows what happened.
Mary Pearson of the Troops Out Movement declared the visit a success.
“New audiences were informed and new support won,” Mary said. Thanking Alice and Briege and all the Ballymurphy 11 relatives for allowing their stories to be told, she added:
“We would also like to thank everyone in Birmingham and Coventry who allowed the women to speak at their events and those who gave donations towards the expenses.
“The campaign continues.”
An Phoblacht
44 Parnell Sq.
Dublin 1
Ireland