Keynote speech by Gerry Adams on education reform in the North 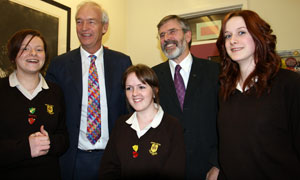 IN A SPEECH delivered to St Louise’s Senior Debating Society on the Falls Road in west Belfast on Tuesday, Sinn Féin President Gerry Adams dealt with the attacks carried out by so-called dissidents in recent days but the main thrust of his remarks were about academic selection and the fundamental reform of the education system that Education Minister Caitríona Ruane is carrying through.

The Catholic Hierarchy needs to understand that there is no possibility of a departmental test being introduced in the absence of legislation, even on a transitional basis

Gerry Adams congratulated Caitríona Ruane for implementing the commitment made by Martin McGuinness when he was Minister of Education to end the 11-Plus.
The Sinn Féin president described the education system, designed 60 years ago, as “no longer fit for the modern world”.
He said:
“Academic selection was an inappropriate and inadequate approach to education.
“It was also unjust and fundamentally wrong.
“It is now gone.
“Last year’s was the last 11-Plus and I welcome that fact.”
The Sinn Féin leader outlined the party’s goal as being “to develop an education system which is pupil-centred and which meets the needs of our modern world”.
Caitríona Ruane’s goal, he said, “is an education system which guarantees the very best education available; the necessary resources and the opportunity to achieve your personal goals and ambitions,” adding:
“That means we have to transform our educational culture to one that constantly strives for excellence.
“I believe that Caitríona’s efforts, which are about a complete reform of education, can create the circumstance in which excellence will thrive.
“Her efforts will ensure a more equitable education system based on educational excellence, including academic excellence for all our children.
“No parent or student who is academically inclined should feel threatened by these reforms.
“On the contrary, the academic excellence which exists in our current arrangements must also be protected, defended and enhanced.”
Gerry Adams also commented on suggestions that the Catholic Hierarchy may propose a new test, proposals that could contain a demand for the Education Department to introduce an interim test.
“The suggestion is that this would be used for three or five years before academic selection would end.
“The Catholic Hierarchy and others need to understand that there is no possibility of a departmental test being introduced in the absence of legislation, even on a transitional basis.

Let me say it again: the 11-Plus is gone - finished - never to return. It is now time to move on

“Last year, the Education Minister said she was prepared to commission such a test based upon the revised curriculum.
But this compromise approach could only have worked in the context of a legislative framework. And this was rejected by the DUP.
“Any test operating outside of legislation is a legal minefield, as those within some grammar schools who are proposing this approach are now finding out.
“Consequently, this proposition was sensibly abandoned and the minister published her guidelines.
“Caithfidh muid bheith soiléir air seo. Ní Bheidh aon scrúdú ag teacht ón roinn agus ba chóir don eaglais glachadh leis seo.
“Any attempt to construct a test would, in my view, be in opposition to the policy of the Catholic sector which is against academic selection and for a more just, modern and fit-for-purpose process of transfer and education system.
“It would also be contrary to the principles of social justice which the Catholic bishops have set out.
“Thus far, resistance to the reform of our education system has mainly been about protecting the old status quo and defending inequality.
“It would be disappointing if the Catholic bishops were to buy into that type of retrogressive approach and it is my hope that they will defend the policy of the Catholic sector against academic selection and stand by the principles of social justice.
“So, let me say it again: the 11-Plus is gone – finished – never to return. It is now time to move on.”
Concluding, the Sinn Féin president said:
“Republicans are committed to a programme of change, in education and in every other facet of our society – a programme of change which delivers equality and social justice and tackles institutional discrimination and inequality; a programme of change which delivers for disadvantaged communities, nationalist and unionist alike, based on objective need...

Republicans are committed to a programme of change which delivers equality and social justice for disadvantaged communities, nationalist and unionist alike, based on objective need

“Sinn Féin is determined to build a system that delivers for all our children and young people.
“We have a vision of a transformed education system which sets aside ideology or outdated processes for one which embraces innovation, takes account of the needs of our global 21st century economy, adopts modern methods and has the needs of children and young people at its heart.
“I believe we will achieve that.”