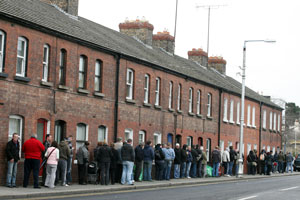 AFTER the release of this week’s disastrous unemployment and Exchequer figures for the 26 Counties, Sinn Féin’s Economy spokesperson, Arthur Morgan TD, described the soaring unemployment figures as “catastrophic”.
“The Government cannot continue to ignore the effect rising unemployment is having on the economy and until a plan for getting Ireland back to work is delivered this downward spiral will continue,” he said.
Deputy Morgan said the Government is ignoring the fact that there is a €5bn deficit in the public finances directly related to job losses and tax revenue is now €2bn below estimates as a result of sharp increases in unemployment. He added that the Government’s budget last October did nothing to stimulate the economy nor protect and create jobs.
As it stands, unemployment figures will far exceed the projected figure of 400,000 by the end of the year.
The Louth TD said that we need taxation reform.
“We need efficiencies in our public finance spend and we need to address wastage. The Commission on Taxation needs to bring forward its report in advance of the Dáil summer recess. However, the Government’s sole approach on cuts and borrowing is fundamentally undermining Ireland’s economy.
“The number one priority should be retaining and creating jobs. It should be getting Ireland back to work.”

1,000 JOBS A DAY
Sinn Féin said that the state needs a plan to hold on to or create the 1,000 jobs a day that are being lost and a way to fast-track business start-ups alongside the creation of a ‘Sales Ireland’ strategy that maximises our existing indigenous export market as well as developing its growth prospects in the immediate longer term.
Sinn Féin candidate for the North-West EU constituency Cllr Pádraig Mac Lochlainn has slammed Government inaction as an additional 5,471 people became unemployed across the 11 counties of the North-West constituency in February.
“Having served on the national executive of the Irish National Organisation of the Unemployed during the 1990s, I understand how demoralising it is for people to lose their jobs, particularly when there is no evidence that the Government is acting as it should to create jobs,” said Cllr Mac Lochlainn.