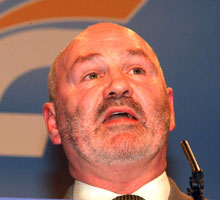 WHILE micro groups, whether wittingly or unwittingly, have dropped into the role of a counter gang, undermining real political progress and bringing the name of republicanism into disrepute, the puppet masters of counter-insurgency, the British Army’s Special Forces, have been drafted in by PSNI Chief Constable Hugh Orde. The Peace Process is under attack from more than one direction.
Despite meeting the Policing Board just hours before, Orde chose to announce his decision to BBC journalists. Members of a covert British Army unit, the Special Reconnaissance Regiment (SRR), were to be deployed in the North, Orde told the media.
The SRR is the latest transfiguration in a series of covert groups which have included 14 Intelligence Company (also known as ‘The Det’), the Force Research Unit (FRU), and the Joint Support Group.
These units have been involved in highly controversial actions, such as extra-judicial executions (ambushes and assassinations), the running of death squads (collusion), as well as spying and sabotage, including attempts to scupper the Stevens Inquiry.

COUNTER-GANGS
At the height of their operations in Ireland, the FRU established and ran loyalist counter-gangs through which the British state not only executed their military and political opponents but also sought to redefine the conflict as indigenous and sectarian.
It is precisely this kind of political manipulation that the Good Friday Agreement sought to eradicate from the ‘policing’ agenda in the North.
The SRR was established in 2005 and is made up of veterans of former covert groups. It is headed by one of the most notorious figures in Britain’s Dirty War, Brigadier Gordon Kerr.
Brigadier Kerr made his first public debut during the trial of a British agent in 1992 when he appeared as an anonymous character witness on behalf of Brian Nelson, who had been targeting nationalists for the UDA. Described in court as simply ‘Colonel J’, he gave his evidence behind a screen but later Kerr was named as head of the FRU, the unit at the heart of British state collusion.
The SRR was also involved in the operation which led to the slaying of Brazilian Jean Charles de Menezes, an innocent man shot dead on a London tube train in July 2005.

UNDERHAND
Covert British army units like the SRR are not ‘peace keepers’. Their role is not necessarily to thwart violence or, as Hugh Orde suggested, combat a heightened threat from micro so-called republican groups but to manipulate violence in the interest of particular political goals. Historically, these securocrats have been against the Peace Process.
Not surprisingly, Orde’s request for the redeployment of SRR operatives was immediately criticised by Sinn Féin and the SDLP.
Alex Maskey, a member of the Policing Board, expressed his frustration and disappointment at the underhand way the PSNI chief had chosen to make the announcement.
“This is a matter of grave concern in particular for the nationalist and republican community, given the legacy of British Special Forces here in Ireland.
“Sinn Féin remains opposed to any such deployment and remains committed to ensuring that the PSNI is held to account to ensure an effective, efficient and non-political policing service.
“Like many others, I was a victim of so-called Special Forces, who colluded with unionist murder gangs in attempts to murder me and my family. There can be no place for these types of groups within any civic and non-political policing service.”