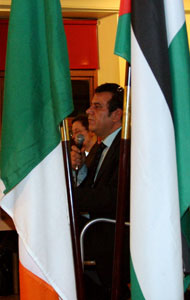 Witnessing the destruction of a people

“NOTHING in all my life, in all the years of conflict I’ve seen in the North of Ireland, prepared me for the devastation I saw in Gaza,” Sinn Féin MEP Bairbre de Brún told a meeting that filled west Belfast’s Irish-language centre, An Culturlann, last week.
The eyewitness report-back, held upon de Brún’s return from the Occupied Palestinian Territories, also saw the MEP hand over a cheque for $7,647.56 to Dr Saeb Sha’ath, a board member of Irish Medical Aid for Palestine (IMAP). The money had been collected throughout west Belfast by Sinn Féin activists during and after the Israeli bombardment of Gaza in December/January which killed more than 1,400 Palestinians.

GAZA CRISIS
Only allowed into Gaza for one day by the Israel Defence Forces (IDF) during the five-day visit by a delegation of MEPs, de Brún told how they visited a site in the territory where 250 houses had formerly stood.
“We stood in mounds of rubble,” she said. “There was nothing left. We were warned by United Nations workers not to go further into the rubble because there was a risk we would be exposed to white phosphorous or unexploded munitions.”
De Brún also related how the delegation had visited the major cement factory in Gaza which had been deliberately targeted by Israeli forces in the last days of the assault.
“About 350 of Gaza’s businesses were targeted in this calculated attack on civilian and economic infrastructure in the final days of the bombardment,” she said.
Dr Sha’ath, who is from Gaza City, told the meeting that the Gaza Strip has for several years been subjected to an intentional process of “de-development” where its economy and its basic social infrastructure were being reduced each year through the blockade and military attacks – with catastrophic consequences for the civilian population.
“More than 80 per cent of Gaza’s 1.4 million people were entirely dependent on food aid to survive even before the Israeli attack,” he said.
Dr Sha’ath said that the recent vicious assault by Israel, and the likelihood of a far-right Israeli government forming after the February elections, has added impetus to the demands of the Palestinian people for a unified national movement, which he hoped would arise from the ongoing Cairo-sponsored unity talks.

PALESTINIAN DREAM
Bairbre de Brún said that in the four days the delegation spent in the West Bank they were witnessing the “quiet, slow destruction of a people”.
“While the world’s gaze is on Gaza, the ongoing Israeli colonisation of the West Bank – where the wall is annexing huge sections of land and where the settlements expand relentlessly – is destroying the dream of a Palestinian state,” she said.
“Unless the world acts, we may see the end of the Palestinian dream of statehood within the next year. The repercussions of that dream disappearing are enormous for the Middle East and the rest of the world.”
Speaking on the need to build a sustained international movement to isolate Israel, de Brún said:
“It is beyond belief for me that the EU-Israel Association [preferential trade] Agreement is still in place after Israel’s countless crimes against the Palestinians. It is a disgrace. This agreement is supposed to be dependent on Israel complying with international human rights law.”
She said that Sinn Féin is working with others in Europe to have this agreement suspended and to prevent the upgrading of another EU agreement with Israel.
Dr Saeb Sha’ath said:
“I would like to thank the Irish people, and in particular Sinn Féin, for their humanitarian – and their political – support for the Palestinian people. Because while there is a humanitarian disaster, the Palestinian issue is primarily a political one.
“Because the interests of powerful states, especially the US, remain invested in Israel, the solidarity of the ordinary citizens of the world will be vital to defend the Palestinians.”