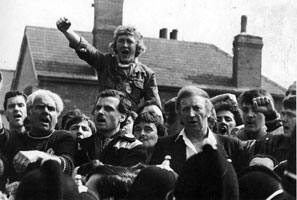 Pitted against the state

IT IS 25 years ago this month that Arthur Scargill, the leader of Britain’s National Union of Mineworkers (NUM), then Britain’s most powerful union, called a national strike in response to Margaret Thatcher’s government’s plans to implement coal pit closures.
This period pitted a mass working-class movement of striking miners fighting for just demands against a Tory political establishment adamant to crush workers’ rights to usher in their free market policies of privatisation and individual greed. Such a mobilisation of workers was unprecedented in Britain in modern times.
Writing in The Guardian last Saturday, for the first time since the strike, Scargill claimed that the NUM negotiated five separate settlements, four of them “sabotaged or withdrawn following the intervention of Thatcher”. Scargill was later informed by a former member of Thatcher’s Cabinet that the Government had “already agreed to end the strike on the union’s terms” until the pit deputies’ union, NACODS, called off its strike action despite 82 per cent of their national ballot opting in favour.
The strike actually began on 1 November 1983 in response to a leaked National Coal Board document revealing that up to 95 pits were earmarked for closure. The NUM adopted an overtime ban in response to the Coal Board’s refusal to negotiate wage increases for miners unless the union accepted job losses and pit closures as inevitable. Although this partial strike was effective in cutting production, the Coal Board confirmed that 20 pits would close, leading to the loss of 20,000 jobs.
The decision to close three pits in Yorkshire, Kent and Scotland ignited the strike, which ultimately led to the arrest of 11,000 strikers, injuries to 7,000 miners and the deaths of 10 people.
The miners’ strike of 1974 effectively brought down Edward Heath’s Tory Government. Thatcher, adamant that this would not happen again, deployed the full rigour of state forces against the miners, including the parliament, courts, police, and MI5, who were backed by an overtly right-wing media.

DEMONISED
The miners were constantly demonised in the press whilst Scargill was vilified through smear campaigns. Thatcher also wanted to emasculate unions and introduced a raft of anti-union measures. Her government foresaw a national strike and prepared by stockpiling coal beforehand.
The height of the confrontation occurred in Orgreave in June 1984 where 10,000 striking miners were brutally confronted by over 8,000 riot police. In 1984, Thatcher castigated the NUM as “the enemy within” and said in parliament that giving in to the miners would be surrendering the rule of parliamentary democracy to the rule of the mob. In her eyes, ‘the mob’ was the striking miners struggling to keep their jobs and feed their kids by taking a defiant stance, not the baton-wielding police who were drafted in from around the country to boost their overtime pay.
The main criticism levelled at Scargill is the absence of a national ballot by the NUM deciding whether or not to strike. The fact that no national ballot was held has always been used to undermine the miners’ strike. Due to this, the High Court deemed the strike illegal, striking miners were not entitled to state benefits, and their children were refused free school meals and social security. This was a conscious attempt by the ruling capitalist class to starve the miners and their families and compel them back to work. However, the vast majority of miners voted with their feet by striking.

STRUGGLE A VICTORY
Though Scargill was and still is pilloried as a communist upstart and egotistical troublemaker whilst leader, he did not solely define the miners’ strike. He relied on the support of thousands of miners and their families who sacrificed everything in their battle to keep their jobs and improve their conditions. This strike was much more than just one individual. Women Against Pit Closures operated soup kitchens, distributed food parcels, organised fund-raisers and stood on picket lines.
The lack of support from the Trades Union Congress and the Labour Party severely dented the miners’ campaign. Steelworkers also failed to show their support. Miners themselves were divided, striking in Yorkshire but working in Nottingham as the latter enjoyed better conditions and wages and did not want to jeopardise those. It was a classic case of divide and conquer.
The miners returned to work in March 1985 after an extremely narrow vote after 12 months on strike. They leave an inspirational legacy and serve as an example of admirable solidarity and unrelenting bravery in the face of adversity. For Scargill, this was “the most courageous and determined stand by trade unionists anywhere in the world, arguing for the right to work”.
The struggle itself was a victory and directly challenged Thatcher’s announcement that there was no such thing as society, only individuals. The miners have not lost because the workers’ battle continues worldwide.

ONE BIG PUSH: Miners resist the police onslaught at Orgreave