WRITE BACK : A response to Matt Treacy's column last week on coursing 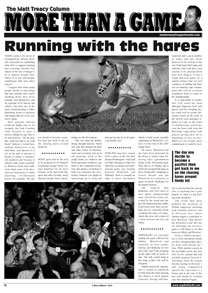 THERE seems to be a distinct air of sour grapes emanating from those none too pleased about the decision of the Sinn Féin Ard Fheis to back the motion calling for a ban on the barbaric practice of blood sports, including hare coursing, a ‘sport’ which is banned by the British Government who, let’s face it, are not exactly renowned for their compassion towards other living things.
As my comrade from the rural wilderness of Finglas, Mr Treacy, has so shrewdly observed, the motion in question was tabled by Dublin Ógra Shinn Féin, an organisation made up of young activists from Dublin as well as from Louth, Meath, Cavan, Leitrim, Monaghan and beyond, most of whom have settled in Dublin for college, work, etc.

If we are to believe everything that Mr Treacy tells us, we would assume that absolutely everybody from rural Ireland is in favour of this hideous spectacle of cruelty and all those who are opposed to it must be a shower of wishy-washy middle-class liberals from the Dublin suburbs who know nothing about anything.
The volume of e-mails in my inbox praising delegates for their decision to back the motion (as well as successive independent polls showing an overwhelming percentage of people from across the country in favour of a ban) show different.
Let’s look beyond the empty rhetoric of hare coursing as a ‘popular rural sport’ and take a look at the facts.
Hare coursing was introduced to this country from Britain, having been brought there by the Romans who were, of course, infamous for their circuses where humans and animals were slaughtered in barbaric and blood-curdling contests for the entertainment of the masses.
Every year, from September to February, compliments of the Environment Minister, up to 7,000 hares are snatched from the wild for hare coursing, despite the hare’s “protected” status under the Wildlife Act and current concerns that its numbers may be in decline.
Once driven into nets, these timid and normally solitary animals are shoved into boxes and transported to coursing compounds. They are medicated, fed an unnatural diet and “trained” to run before the dogs towards an “escape area”, which is really another enclosed compound. All of this constitutes gross interference and trauma for a wild animal, cruelly ripped out of its natural habitat.
On the day of coursing the hares must run for their lives before two greyhounds. The muzzles now worn by the hounds do not eliminate the cruelty. Hares can be struck, tossed into the air and mauled into the ground. Stress and shock also contributes hugely towards the death of these quiet animals.
Proponents of the ‘sport’, mostly middle-aged men, claim that kills rarely happen. However, according to a parliamentary question tabled by the late Tony Gregory late last year, 22 protected hares have been killed at coursing events. As the coursing season now comes to a close, I imagine that this number has jumped significantly.
The practice of ‘blooding’ (i.e. allowing the dogs to rip apart a small animal such as a rabbit or kitten to give the taste for blood) is widespread at coursing events.

The muzzles now worn by the hounds do not eliminate the cruelty. Hares can be struck, tossed into the air and mauled into the ground

So let’s review: hare coursing, a medieval style ‘sport’ mostly enjoyed by men in their mid-40s, a captured and frightened wild protected hare, two dogs with a lust for blood (kindly provided by the little rabbit they were just given by the nice man to rip apart), let the hare loose, dogs chase it. If it hasn’t died from shock, being tossed into the air or trampled into the ground, well and good, and ‘pop’, in ye go, back into your pen to do it all again next week!  I really and truly fail to see the appeal here.
It’s ironic and saddening that Ireland is now the last outpost of a barbaric blood sport inherited from the Brits who themselves have now seen fit to outlaw it, along with fox hunting and deer hunting with dogs. However, with a united effort we can see this cruel practice banned for good.
Killing animals for fun is sick and wrong and should be opposed by all right-thinking individuals.
I’ll finish with this quote from the Dalai Lama, which I feel is quite fitting:
“Killing animals for sport, for pleasure, for adventure, and for hides and furs is a phenomenon which is at once disgusting and distressing. There is no justification in indulging is such acts of brutality.”