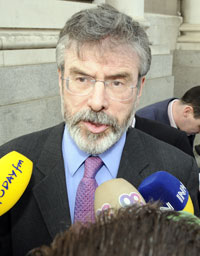 The only way to go is forward

IN HIS Léargas blog for the Belfast Media Group on Monday, Sinn Féin President Gerry Adams MP described the Antrim barracks attack at the weekend – in which two British soldiers were killed and two other military personnel and two civilian pizza delivery men were wounded - as “an attack on the Peace Process”.
We reproduce his blog (which was written before the killing of a PSNI officer on Monday night) below.

ON Saturday night I was in County Clare. The local government elections in the South are in 12 weeks’ time. That’s on June 5th. The elections to the European Parliament in both parts of Ireland are on the 4th and 5th.
Twelve weeks isn’t a long time and I travelled to Clare from Dublin after a hectic two days, including an Ard Chomhairle meeting, in the capital. The Ard Chomhairle was meeting for the first time since the recent Ard Fheis and it was a positive and forward-looking gathering which set out a programme of work for the next 12 months.

Our defence of the legitimacy of IRA actions was in the context of British Army occupation and on the absence of any alternative way to bring about positive change. Today there is an alternative
– Gerry Adams

We also discussed PSNI Chief Constable Hugh Orde’s decision to deploy undercover British Army operatives against so-called dissident elements. Understandably, republicans and democrats, including myself, have protested against and are strongly opposed to that decision.
Apart from anything else, it is a harking back to the old days when such units created havoc in our society by perpetuating conflict and destabilising communities.
There was also a brief discussion about the so-called dissidents and their failure to advance any coherent strategy – in fact any strategy at all. Hugh Orde made a mistake. But none of us should be naive about this. Huge progress has been made in developing a new political dispensation here but the British jurisdiction remains, albeit in a conditional form, and that jurisdiction involves British agencies, including their spooks and spies. Republicans and democrats are clearly opposed to this.
Anyway, we had a good discussion about all of this and then off to the Banner County.
The event there took the form of a public meeting in Ennis, the county town. When it was over, somewhere around 11pm, I got news of a shooting incident in Antrim Town. The next few hours were spent trying to catch up on what had happened. Early next morning, it was clear and since then Ireland is once again in the news big time.
So what’s it all about?
It’s an attack on the Peace Process, that’s what it is about. There can be no ambiguity or ambivalence about that. Back in the North, on Monday the Assembly was clear on this issue. But what of the popular mood? In my view, the vast majority of people are opposed to what happened. In the days when there was no peaceful or democratic way forward for those who wanted basic rights – civil rights – or for those who wanted national rights as well, Sinn Féin spokespersons, including myself, defended the IRA’s armed struggle.
We didn’t accept everything that was done and in most instances the case we made was in defence of the legitimacy of IRA actions in the context of British Army occupation.
There is no such legitimacy today.
Our political position was based also on the absence of any alternative way to bring about positive change. Today there is an alternative.

The political institutions, the Peace Process and Sinn Féin are as much a target of the perpetrators of Saturday night’s attack as those they killed or injured.  That is why they have to be resisted – politically; democratically; peacefully

As I told the Assembly:
“I stand here today as an unrepentant, unapologetic Irish republican. I want to see an end to British rule on this island and the unity of orange and green. This can only be achieved by peaceful and democratic means and Sinn Féin is wedded to that.”
It’s also my conviction that these objectives can be achieved. Sinn Féin has a strategy to do just that and we are building the political support and structures to advance this.
The political institutions, the Peace Process and Sinn Féin are as much a target of the perpetrators of Saturday night’s attack as those they killed or injured. That is why they have to be resisted – politically; democratically; peacefully. They want to destroy the hard-won progress of recent times. They cannot be allowed to succeed.

Everyone has a responsibility to defend the peace. There can be no going back

The gains made for and by the people of this island cannot be surrendered. So why don’t those who have set themselves up as political spokespersons for the so-called dissidents come forward to explain this attack? Why don’t they outline a rationale? Why don’t they defend the legitimacy of this action? In the absence of any other explanation, I can only presume it is because there is no rationale other than that they could do what they did. And let there be no ambiguity about this – that is not good enough!
There is also an onus on the British Government and the PSNI to resist any temptation or any demands for a return to the bad practices of the past. This would be equally wrong. It would also sideline the Peace Process and political leaders. That would be foolhardy and play into the hands of those who were responsible for the Antrim attack.
In particular, this means that the transparent and accountability arrangements around the PSNI must be adhered to and defended.  That’s what I told British Prime Minister Gordon Brown when we met on Monday morning.
For our part, genuine republicans and democrats will work with the PSNI to ensure that those involved in this attack are apprehended and subjected to due process.
The popular will in Ireland is for peaceful and democratic change. I’m sure that’s shared by our neighbours in Britain and further afield. So everyone has a responsibility to defend the peace. There can be no going back. The only way to go is forward.