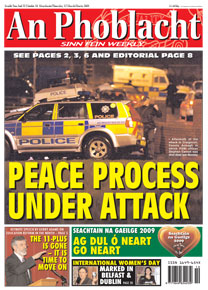 “SINN FÉIN will not be deflected from its republican and democratic objectives,” Gerry Adams said after two gun attacks threatened to destabilise the Peace Process and undermine political progress in the North.
A gun attack at a British Army barracks in Antrim Town, in which two British soldiers were killed and four other people injured, including two civilians, has been claimed by the micro group calling itself the ‘Real IRA’.

Four British soldiers came under fire from automatic weapons as a pizza delivery service arrived at the barracks gates around 9pm on Saturday night. Two British soldiers died at the scene. A 32-year-old Polish worker and a local teenager were seriously injured in the gunfire.
The barracks is one of a number which are under consideration for closure as part of continuing demilitarisation moves in the North.
On Monday, 48 hours later, a PSNI officer Stephen Carroll was shot dead after responding to a call claiming that a house was under attack by stone throwers in the Lismore Manor housing estate in Craigavon. Two PSNI vehicles arrived at the scene and Carroll was shot in the head as he left his vehicle and died at the scene. The group calling itself the ‘Continuity IRA’ said they had carried out the shooting.
Slamming the attacks as an attack on the Peace Process, Gerry Adams said that those responsible have no support and no strategy to achieve a united Ireland.
“Their intention is to bring British soldiers back onto the streets, destroying the progress of recent times and plunging Ireland back into conflict.
“Irish republicans and democrats have a duty to defend the Peace Process. Sinn Féin has a strategy to bring about an end to British rule in our country by peaceful and democratic means.
“The Peace Process was built not least because of the willingness of republicans to take risks and to be strategic and long-sighted. Our responsibility is to defend it and the progress that has been made towards achieving national and democratic rights.”
Addressing the North’s Assembly, the Sinn Féin leader said it is a time for calm and thoughtful but decisive leadership. “The Peace Process was built against the odds. It will endure. That is our responsibility. We will not be deflected,” said Adams.
Describing himself as “an unrepentant and unapologetic republican”, the Sinn Féin president said as a republican he wants to see an end to British rule and for there to be unity between orange and green.
“That can be achieved by peaceful and democratic means and Sinn Féin is wedded to that,” said Adams.

I was a member of the IRA but that war is over now. The people responsible for Saturday night’s incident are clearly signalling that they want to restart that war. They do not have the right to do that
– Martin McGuinness

Commenting on power-sharing, Adams pointed out that, while different political aspirations continue, “We are, as republicans and unionists, united in an effort to make politics work, to set aside divisions and differences and, in an ongoing process, to build peace based on equality.”
While the process is not perfect and even difficult at times, “I believe that all of us, collectively, have successfully constructed a political strategy and a way forward to deal with the issues that are pressing down on our people.
“Saturday’s attack was a deliberate and calculated attack on the Peace Process. It was wrong. The perpetrators want to destroy the hard-won progress of recent years. The progress made for the people of this island and the people of the North cannot be surrendered. There is a huge onus on us to make politics work.
“There is also an onus on the British Government and the PSNI to resist any temptation to return to the bad practices of the past or to sideline the Peace Process or the political leaders. This means that the transparency and accountability arrangements around the PSNI must be adhered to and actively promoted.”
The republican leader continued:
“Sinn Féin will – not just here and in the media, but in the communities that it represents – go toe to toe with those who would try to drag the people of this island, particularly in the North, back into conflict.
“The popular will is for peaceful political change, the popular will is for democratic change. It is our responsibility to deliver for all the people whom we represent.”
Earlier, Sinn Féin Chief Negotiator and deputy First Minister Martin McGuinness described the gun attacks as “totally and absolutely wrong”.
Martin McGuinness said:
“I was a member of the IRA but that war is over now. The people responsible for Saturday night’s incident are clearly signalling that they want to restart that war. They do not have the right to do that.”
Speaking in the Dáil, Sinn Féin TD Caoimhghín Ó Caoláin said that the tiny unrepresentative groups responsible for the attacks would neither derail the Peace Process nor divert Irish republicans from the strategy which they have adopted democratically.
“The Irish Republican Army leadership and Volunteers have long since declared that the war is over”, he said, adding that the killings lacked any legitimacy.
“The tiny splinter groups that carried out these attacks are pursuing a militarist agenda, primarily designed to justify their own existence and perpetuate their own factions.
“They are totally divorced from republicans throughout Ireland and abroad. They have nothing to offer but misery in their attempts to drag back into conflict the communities they falsely claim to represent.
“These groups will not succeed in their attempts to derail the Peace Process which has the full support of the overwhelming majority of the Irish people and of all political parties.

‘The tiny splinter groups that carried out these attacks are pursuing a militarist agenda, primarily designed to justify their own existence and perpetuate their own factions. They are totally divorced from republicans throughout Ireland and abroad’
– Caoimhghín Ó Caoláin

“True Irish republicans will not be diverted from the peace strategy we have adopted democratically and pursued successfully. That strategy is designed to advance, by peaceful and democratic means, the cause of Irish unity, including the removal of the British Army, which should have no role in Ireland.”