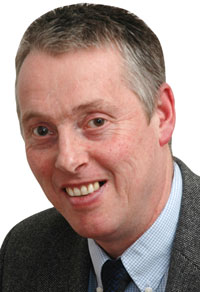 EVERY generation of republicans prisoners held two things in common:-
1.     To escape at every opportunity;
2.     An interest in the Irish language.
In the most recent phase of our struggle, imprisoned republicans have used the various prisons for a whole new generation of Irish-language activism, Long Kesh being the most notable because of the vast numbers that passed through the camp over a 27-year period.
In the earlier 1970s, republican prisoners, both internees and sentenced, used a number of Nissan huts as Gaeltacht (Irish-speaking) areas. This facility allowed the language to flourish amongst the prisoners; the most famous student of that time was the young Bobby Sands.
Most captured republicans either had no Gaeilge or had a dislike of the subject due to the manner in which it was taught in the schooling system. As Barry Murray put it, “Irish was beaten into us in St Michael’s by a Christian Brother.” However, when republicans found themselves in prison they viewed the language as part of their cultural identity and also as a weapon of resistance.
I was one of those who had not a focal (word) when I joined the struggle, however I did make an attempt to learn the language whilst on the run in Clones with the aid of a booklet and the RTÉ programme called Anois is Aris. Pat Treanor asked me one night how I was progressing, I replied that I had found it too difficult and had thrown the book in the corner. Not to disappoint my friend, who was an Irish-language enthusiast, I told him I’d learn it if I found myself in prison. Within a year I was halfway there, having been arrested.

NO BOOKS
When the British withdrew political status and built the H-Blocks to defeat republican prisoners, a new phase opened up for the Irish language and imprisoned republicans. Many of the young men who had been in the Cages had been re-arrested but this time to face a completely different set of circumstances in the H-Blocks. Two of those back inside were Bobby Sands and his friend, Séanna Walsh.  Whilst the conditions for learning the language had changed, the prisoners’ desire and motivation had not.
The prisoners in the protesting H-Blocks had no books, papers, writing materials or radios. They pulled their Irish from memory and lessons were shouted out the doors or through a hole in the wall along the pipes from cell to cell. The men who had spent time in the Gaeltacht in the Cages were essential to the development of the language in such grim conditions.
Laurence McKeown said of the period:
“Learning and speaking the Irish language therefore had significance for a number of reasons, some practical some political. It was a means through which to communicate to comrades, to exclude enemies, to reduce boredom and stimulate the mind, and ultimately, through which to express identity.  It was therefore a political and subversive pursuit” (Out of Time, Irish Republican Prisoners, Long Kesh, 1972-2000).
My first months in prison between Musgrave Park Hospital and Crumlin Road were focused on recovering from injuries received during my arrest and I did not get many opportunities to learn much Irish. But I do remember leaving the place with a number of basic phrases: faoi ghlas (lock up); maidin mhaith (good morning); oiche mhaith (good night); ar chuala tú an scéal (did you hear the news?);  chuala (I heard); níor chuala (I didn’t hear). However, with the knowledge that I would be spending the next 12 years of my life in the Kesh, there was all the time in the world to fulfil the promise made to my comrade in Clones.
In the Blocks I was on a Red Book classification, meaning you were moved from block to block every two weeks. Whilst it was good to meet all the men in the camp, it didn’t allow time to settle into ranganna (classes) going on in the wings. One of the first ranganna I did attend was taken by mo dhearthar Caoimhín, (brother Kevin).
One abiding memory I have of that rang is that it took place at 10am each weekday. This meant being up early, showered, breakfast and obair bhaile déanta (homework done). Only then you would notice Kevin sauntering up the landing, slop out pot in hand and a towel wrapped around him at 5 minutes to 10. Nothing has changed.

‘THE GREEN BOOK’
The Irish-language learners followed a programme at that time designed by Leo Green, which became known as ‘The Green Book’, the second we had encountered in our careers. The course was to give men the basic level of Irish to have a conversation about yourself and your family. Once you had attained this you were presented with a Fáinne Glas. I was put through the conversational test by the author himself and this was my big breakthrough and the motivational factor to seek greater fluency.
Although all levels of ranganna were taking place throughout the camp in the late 1980s and early 1990s, the usage amongst the men on the wings was minimal. The men most fluent in the language were getting released and you could not compensate for that, with this and the increased distractions and better conditions, the level of Irish usage had noticably declined in the camp.
A number of men concerned about the situation had talked of setting up a Gaeltacht but that’s as far as it went. When I was appointed O/C of the camp in 1993, the same men – Kevin McMahon, (now an Irish-language teacher in the Gaeltacht area of Donegal) and Peter Cunningham (now a development officer with the Irish-language organisation Comhairle na Gaelscoiliochta) – asked that I seriously consider establishing Gaeltacht wings if the language was to progress in the camp. I had been totally in favour of such an initiative for a number of years but I had to convince sceptical members of the camp staff, who believed it would undermine the Army structures.

CULTURE WING
At about the same time, the prison administration asked would we occupy an empty wing in H6. We told them we would only do so if we were allowed to determine who would move to it. We didn’t reveal our intentions. They agreed and we sent down 21 men: a mixture of fluent and dedicated learners, with the core Army structures protected. The Screws referred to it as “the culture wing”. It was during a visit to this wing that a number of Fermanagh men discussed the idea of establishing an Irish-language Gaelscoil in Lisnaskea and that it should be named after the Corncrake, a depleted species, like our native tongue. Some 14 years after that conversation, I am proud to say we have a flourishing Naiscoil an Traonaigh and Bunscoil an Traonaigh (The Corncrake) in Lois na Sceithe and officially opened by Education Minister Caitríona Ruane in May 2008.
When Padraic Wilson took over as O/C in late 1995, his staff established a second Gaelteacht. This time they asked the administration upfront and they agreed, such was the working relationship between the camp staff and prison administration at that time. I was one of those asked to move on to the new Gaeltacht, with fellow county men Noel McHugh and Francie McGoldrick.  Unlike Bobby Sands and his comrades some 16 years earlier, we had every Irish-language book published,  access to A-Level and O-Level teachers, TG4, and Raidió na Gaeltachta. And we conducted two or three ranganna each day (except Sundays). In my experience, I learnt  more Irish in those first six months than the previous ten years. We were sleeping, eating and thinking Gaelic.
The establishing of these two Gaeltachts was a very important development in terms of the whole atmosphere in the camp. Hundreds of men put their names down to replace those getting released from the Gaeltacht. The significance of the Gaeltacht was not just in terms of a language revival or renaissance but there was a sense of pride and achievement that we had done it.
The success of this revival within Long Kesh was the fact that so many people went on to play a significant role in the flourishing revival on the outside. Many became múinteoirí (teachers) and found employment in Irish-language organisations. Many are associated with establishing bunscoileanna and naiscoileanna in their areas and others who became parents sent their children to these Gaelscoileanna. For example, Bobby Sands set up one of the first naiscoileanna in Twinbrook upon his release in the mid-1970s.
As for myself, although I didn’t achieve the level of fluency that I desired, I nonetheless was able hold a comhrá mór (long conversation) with Pat Treanor upon my release. Sin é.
An Phoblacht
44 Parnell Sq.
Dublin 1
Ireland