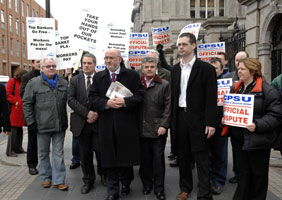 Drawing the line in Leinster House

SINN FÉIN’S Oireachtas group of four TDs and one senator and Sinn Féin support staff refused to pass the Civil and Public Services Union (CPSU) pickets at the Dáil last week during the one-day civil service stoppage against the pension levy.
While Labour, Fine Gael, Fianna Fáil, Progressive Democrat and Green Party TDs crossed the picket lines, Sinn Féin Dáil leader Caoimhghín Ó Caoláin and his colleagues stood in solidarity with CPSU members at the gates.
On the previous day, on the proposal of Deputy Ó Caoláin, the Sinn Féin Oireachtas members and support staff in Leinster House decided unanimously not to pass the picket. Speaking from the picket line, Deputy Ó Caoláin said:
“Sinn Féin’s Oireachtas team is today standing in solidarity with the CPSU workers who are picketing Leinster House in protest against the grossly inequitable so-called public service pension levy.
“The rushing through of this legislation in the face of such fierce opposition both in the Dáil and on the streets is completely unacceptable to Sinn Féin and we make an eleventh-hour appeal to the Government not to enact this legislation and to heed the call from the Irish Congress of Trade Unions for the reopening of social partnership talks.
“We know that people in the public service are willing to make a fair contribution to help address the economic crisis but they are not willing and they will not stand for the imposition of this discriminatory tax – a tax on public service rather than a levy on public service pensions.”

WITHDRAW THE BILL
Speaking on 24 February in the Dáil debate on the legislation to provide for the levy, Deputy Ó Caoláin called on the Government to withdraw the Financial Emergency Measures in the Public Interest Bill 2009 Bill. He first referred to the Anglo Irish Bank scandal:
“I welcome today’s Garda Fraud Squad raid on Anglo Irish Bank. I hope that, after such a lapse of time since the scandal broke, it was not met with empty filing cabinets and deleted computer files. The bank should have been treated like this long ago instead of being nationalised and the ‘Anglo Irish Ten’ should be named and shamed.
“But even as the raid was going on we were reading of how a now-resigned director of Anglo Irish is still receiving annually fees of €28,000 of taxpayers’ money was sitting on two state boards — Forfás and Bórd na Móna. This perk from the public purse is more than many low-paid workers receive in salary for a year. Another now resigned Anglo Irish director received €16,846 annually for his role as chair of the Dublin Airport Authority.”
The Sinn Féin TD contrasted the Government’s treatment of bankers with that of its own public service workers.
“I want to commend the 120,000 people who marched on the streets of Dublin last Saturday to demand fairness and equity in the measures to be taken to address the greatest economic crisis we have faced since at least the 1930s.
“Some commentators have tried to portray that great mobilisation in a negative light. Yes, there is anger –  justifiable anger. Yes, there is much pessimism, and who can blame people for that, given the scale of the crisis we are seeing and the prospect that it will get much worse before it gets better?
“But there is also a willingness on the part of people to play their part in putting things right, to pay their fair share, to work for one another, for their families, for their communities and for this country. And that is also why there is so much deep anger. Because we have seen, as we have never seen before, nakedly exposed, the absolute greed at the head of the Irish financial system and in the upper echelons of big business.  And what is worse, we have seen how this greed — and in some cases criminal greed — was facilitated or connived at by this state’s political leaders and so-called regulators.

€1 BILLION HSE SHORTFALL
“As the Health Service Executive faces a shortfall of over €1bn in 2009 we learn of the massive salaries and allowances at the top of the HSE, including €16,000 per month for an advisor to HSE Chief Brendan Drumm. But where did the Government go to impose sanctions and penalties when the bubble burst?
“They slashed health and education services and they rushed to impose this disgraceful, inequitable and possibly illegal public service pension levy. Low-income and middle-income workers are penalised most by this imposition. It is not a pension levy because it is payable on all earnings and not only on pensionable salaries.
“The facts speak for themselves. For example, less than 5 per cent of nurses and midwives actually get a full pension; the HSE in 2007 paid out 6.8 per cent of its total salary bill to pensioners and collected 6.5 per cent of its salary bill from serving staff.

A now-resigned director of Anglo Irish Bank is still receiving annually fees of €28,000 of taxpayers’ money sitting on two state boards. This perk from the public purse is more than many low-paid workers receive in salary for a year
— Sinn Féin Dáil leader Caoimhghín Ó Caoláin

“I reject efforts to divide public sector from private sector workers. They marched side by side on the streets of Dublin last weekend. Workers in all parts of the public service marched with workers in the likes of Waterford Crystal and SR Technics.”
Ó Caoláin singled out SR Technics as “a world leader in aircraft repair and maintenance, a strategic industry for Ireland, a bank of skills built up by Irish workers over generations” and saluted SR Technics workers.
“The multinational owner, for its own selfish corporate reasons, has brought the company and its 1,100 workers and their families to the brink of closure, the loss of their livelihoods and the loss to Ireland of this viable and vital industry.
“I salute the workforce in their current efforts to save the company.  The Government must play its part fully in this effort, including investing capital if necessary. A bank of world-class skills and an employer of 1,100 people is more important than a toxic bank and is far more worthy of Government support.
“We need a job-retention and job-creation strategy and we need it now. There is no such strategy in this Bill which we reject. Let the Government bring forward a viable and fair strategy and we will support it.”