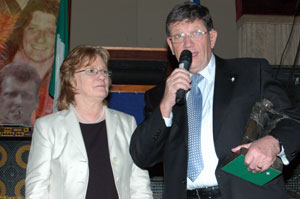 The ‘Can-Do Man’ of the Republican Movement was given a special mention and honour on the night set aside for honourees from the four provinces and abroad.
Describing him as “a seminal figure in this struggle of ours”, Rita O’Hare declared that he had “initiated many of our very, very courageous steps forward”.
“The new president of America is known for his slogan, ‘Yes we can,’” she
said. “This man – Pat Doherty – was always the ‘Can-Do Man’.  He never, ever thought we would not get to the stage we are now and further.”
On stepping down from his role as Sinn Féin vice-president after 21 years, Pat Doherty was given a small presentation by Rita who said what marked him out was his “compassion and humanity – his representation of the people and his ability to listen”. That last trait in particular, she said, translated into the many anecdotes he tells at meetings, usually associated with his lateness for the meeting itself!
Pat himself warned against any notion that he was retiring, saying that Mitchel McLaughlin has set a tough deadline for achieving Irish unity and that is what he was working towards.  Then he added, with that customary twinkle and mischievous smile:
“I also have a few years to explain to Mary Lou how to handle Gerry A.  And then even more years to explain how to handle Rita.”