A spirit that cannot be quenched 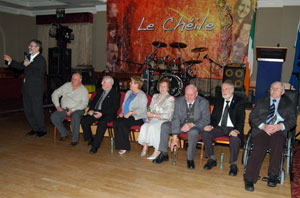 TRIBUTE: When Ireland is free 'it will be because of our honourees', said Gerry Adams

THREE HUNDRED people crowded in to the Stillorgan Park Hotel in Dublin for the annual Le Chéile dinner dance to honour republicans from the four provinces and abroad for their dedication and commitment to the republican struggle.
Those present heard Gerry Adams describe the nominees as representative of “a spirit that cannot be quenched and a struggle that cannot be defeated”.
The evening opened with the playing of the national anthem.  This was followed by the reading, in Irish and English, of a brief biography of each of the nominees by Six-County MEP Bairbre de Brún and Cllr Pádraig Mac Lochlainn: Eddie and Rose Caughey (England), Peter John and Mary Caraher (Ulster), Tommy Devereux (Connacht), Eddie Butler (Munster) and Mick ‘Avic’ O’Leary (Leinster).
Each recipient was then presented with a marble and bronze sculpture by Sinn Féin President Gerry Adams and newly elected Vice-President Mary Lou McDonald.
Gerry Adams said the honourees are “ordinary decent human beings to whom we owe a huge amount”.
“The richness of our struggle is, of course, not that we are honouring these individuals or couples but that we could be honouring another 200, 300 or 400 more,” he said.
“They are representative of a spirit that cannot be quenched – of a struggle that cannot be defeated – and of an Ireland which will one day be free.
“And when it is,” he said, “it will be because of our honourees.”

HUMBLED
Each of the honourees was then given the opportunity to say a few words.
All of them said they were “humbled” by the occasion with several references made to the fact that they were receiving the same award as last year’s recipient, the late Brian Keenan.
Peter John Caraher said:
“I dedicate this night to him and to all the brave men and women who gave their lives for our good cause.” Mary Caraher joined him in accepting the award and dedicating it to a list from “the native Irish who had the land confiscated from Cromwell” through to the Famine and hunger strikes and on to “our Sinn Féin politicians who are making marvellous progress in all 32 Counties”.
Eddie Caughey said he was “deeply honoured to be among his republican family” and that anything his family had done was done “out of commitment and responsibility to the Irish people and the struggle for Irish self-determination”.  His daughter, Sally, who attended in place of her mother, Rose, who couldn’t be there because of illness, said the family was very grateful for the award because she modestly claimed the role they played in England was small.
Eddie Butler reflected on the support he received from his parents and siblings during his long years in prison in Britain, saying he is very proud of all his family. Even when his brothers and sisters emigrated to the United States and got married and started raising their own families they would still make the difficult and expensive trips to English jails to visit him. Eddie gave a special mention also to campaigners Sister Sarah Clarke, Mike Duffy in the US and Anne O’Sullivan in the Dublin POW Department for their support for prisoners through the years.

FOR MAYO
Tommy Devereux thanked his wife and family for their support and he dedicated his award to “an awful lot of people in Mayo she’ll never know.
“Without them,” he said, “I wouldn’t be here tonight.  I am very grateful and this is for them.”
Mick ‘Avic’ O’Leary described the occasion as the “biggest night” of his life and congratulated his fellow nominees.  Referring to the time of his first introduction to active republicanism, he said: “When I was 15, de Valera executed 10 republicans. Peadar O’Donnell summed it up well when he described those years as the ‘age of betrayal’ –  a time when good strong republicans who have fought heart in hand were seduced into an establishment and became as oppressive as the ones they had fought against.”
He said the people in power today are an offshoot of those people. He said they are “masters of sleaze and slime”.  He said the local elections are going to be a big test for republicans. “If it doesn’t happen locally, what’s done nationally won’t be of any use,” he said. “We are going to have to give people the tools, motivation and the running orders to advance Sinn Féin’s ideas of the 32-County Republic.”
Mick finished with another reference to Brian Keenan – this time using a quote of Brian’s to describe how he felt at being given the award.  He said: “Brian would say, ‘Jaysus, lads  – I love youse to bits.’”
The craic and banter went on late in to the night.