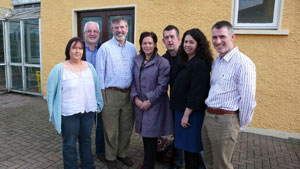 LAST weekend’s Sinn Féin Ard Fheis saw the further emergence of the new, young Sinn Féin leadership from across the island, North and South. Again and again young, highly articulate republicans - some of them already elected representatives, some not, addressed the Ard Fheis with passion on a range of issues facing the country.
If one of the surest guarantees of the success of a revolutionary struggle is that a new generation of leaders comes to the fore with the commitment and vigour shown by their predecessors, then the 2009 Ard Fheis was proof positive of that process within Irish republicanism.
That process was further confirmed on the election of the new party Officer Board with Dublin MEP Mary Lou McDonald succeeding Pat Doherty as Vice President, Declan Kearney becoming Party Chairperson, Dawn Doyle taking over as General Secretary and Maurice Quinlivan elected as one of the party’s joint Treasurers.
Another positive development was that the 2009 Ard Fheis also saw the largest number of women candidates standing for election to the Ard Cómhairle in recent years. This was validation of the party’s ongoing efforts to increase the presence and profile of women in leadership positions and to ensure that the party itself embodies its ideal of an Ireland of equals.

The Sinn Féin Ard Cómhairle elected by delegates at the Ard Fheis is as follows: