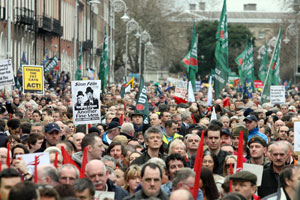 In one of the  biggest ever public demonstrations witnessed in Ireland in recent years up to 120,000 people marched through Dublin on Saturday 21 February, in a massive protest against the Irish Government’s handling of the economic downturn and its attacks on working people.
Sinn Féin representatives, including Workers’ Rights Spokeperson Arthur Morgan TD and various councillors left the party’s Ard Fheis to join the demonstrators who thronged the route from Parnell Square and down through O’Connell Street.
The march, organised by the Irish Congress of Trade Unions (ICTU), took nearly an hour-and-half to make its way to Merrion Square.
The massive march was led by the Dublin Fire Brigade pipe band and workers from Waterford Crystal and SR Technics and featured hundreds of union banners and people carrying placards opposing attacks on the living conditions of working families and calling for action against against the ‘golden circle’ and ‘cosy cartels’ in Irish society.
While one of the issues that originally mobilised many workers was the pension levy on public sector workers, the objectives of the national demonstration had wider significance and the march featured many thousands of private sector workers such as construction workers who marched alongside huge delegations of teachers, local government and service workers.
ICTU says the protest is just the first step in a campaign in support of a fairer way to achieve economic recovery.
Addressing the demonstration ICTU general secretary David Begg said that the business elite who had destroyed the economy had not been held to account.
Begg called on the Irish Government to talk to the trade union movement on its alternative 10-point plan for economic recovery.

‘ECONOMIC TREASON’
He described the activities of people who led the banks as “economic treason” and said that the outside world did not see a vibrant economy in Ireland any more but rather an economy which was propped up by “crony capitalism” and nothing else.
He said nobody was untouched by the threat of unemployment. It didn't matter whether people were young or old or had a university degree or a craft or nothing at all. “Nobody is safe and there is nowhere to go,” he said.
Begg said if Irish taxpayers were taking responsibility for the cost of the €300 million in loans to the 10 members of the so-called ‘golden circle’ involved in investing in Anglo Irish Bank, then the people were entitled to know their identities at the very least.
He also said that it was his opinion that sooner or later the whole of the Irish banking system would have to be nationalised. Begg said commentators and business leaders had called on the Government to act unilaterally if necessary. However, he maintained that the Government existed “to look after the citizens of the country not just the business interests of the country”.
“If the Government acts unilaterally to the satisfaction of all those commentators who want it to do that, I would say be careful what you wish for,” he said.
ICTU president Patricia McKeown said the Government wanted workers who built the economy to make the sacrifices while it protected those who wrecked it.
“We are not prepared to live in that society”, she said.
McKeown said it was time for Irish workers to demonstrate to the Government the power they really held:
“That power is today on the streets of Dublin, it is in industrial action but most significantly it is at the ballot box. If our Government and the elected politicians are not prepared here and now to pledge that they will act now and act on our behalf and act on the proposals we have placed before them then you must be prepared to deny them even a single vote and to send that message out loud and clear,” she said.
General-secretary of Impact trade union Peter McLoone said, “What we need now as a matter of urgency is a fresh approach within the context of the Social Partnership model.”

FURTHER PROTESTS
This week will see the first strike action in protest at the government’s policies.
On Thursday 13,000 lower-paid civil servants who are members of the Civil and Public Services Union (CPSU) will hold a one-day stoppage against the controversial pension levy.
The move will affect services across a range of Government departments, as well as social welfare and passport offices.
At the weekend workers at Dublin Bus will begin strike action over planned cutbacks.
On Saturday the National Bus and Railworkers Union (NBRU), will stage a one-day stoppage. On Sunday, the other main union at Dublin Bus, Siptu, will begin an all-out strike.
The proposed cutbacks at Dublin Bus would involve about 290 job losses, including those of 160 drivers.
The company is also to reduce its fleet by 120 buses.
Separately, tens of thousands of other public service staff are currently balloting for industrial action.
This includes members of the three teaching unions, INTO, ASTI and TUI, as well as 10,000 members of the PSEU, which represents mid-ranking civil servants.
The Psychiatric Nurses Association is also carrying out a ballot of members on industrial action.
The Garda Representative Association (GRA), which represents all rank-and-file members of the force, is organising a march against the pension levy for its members in Dublin city centre on Wednesday.
The GRA is expecting a turnout of over 1,000, and has encouraged Gardaí to bring their families.

SUPPORT: Cllr Dessie Ellis with some of the Sinn Féin contingent at the march