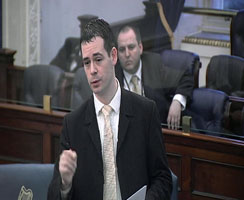 “WE are trying to make the Seanad effective, we want changes and we can’t go on just replicating what’s happening in the Dáil. We cannot sit and do nothing”. This was the view of Sinn Féin Senator Pearse Doherty speaking to An Phoblacht hours before an unprecedented debate on social and economic inequality in the West.
The debate’s agenda was driven by Doherty, who has secured unanimous cross party support for the recommendations of his recently published report – Awakening the West: Overcoming Social and Economic Inequality.
Doherty says there is “now a cross party vision for the region”, and he believes that the Seanad can “provide a platform for community groups, chambers of commerce and the whole wider community to have an input in government policy”.
When Sinn Féin Senator Pearse Doherty, aided by researchers Councillor Pádraig Mac Lochlainn, who attended this week’s debate, and Ruadhan Mac Aodhain started their study of the West they took the unique initiative of leaving the confines of Leinster House and toured the west, meeting 70 community groups, local businesses, councils, chambers of commerce and other interested parties, 57 of whom made submissions to the group. Travelling from west Cork and Kerry all the way to Donegal, they garnered information, viewpoints, data from other groups’ studies which was moulded carefully into the conclusions and recommendations of the Awakening the West report.
Speaking to An Phoblacht Senator Doherty said that most previous surveys commissioned by the committee are based on small desk surveys and parliamentary questions but he wanted to do a “comprehensive study”.
When the Arts, Sports, tourism, Rural, Community and Gaeltacht Affairs committee met in private session they were “blown away by the detail of the report” and some members were “shocked by the findings”.
Unfortunately though the recommendations of Awakening the West were accepted unanimously by the joint committee on Arts, Sports, tourism, Rural, Community and Gaeltacht Affairs, the Fianna Fail Green Party cabinet has chosen to ignore them.

Ó CUíV IGNORES CONSENSUS
In this week’s debate on the West, Fianna Fáil’s Éamon O’Cúiv and other party senators ignored the prevailing consensus and ostrich like talked of a West that does not actually exist today.
Fianna Fáil’s Éamon Ó Cuív as minister for Community, Rural and Gaeltacht Affairs opened the debate setting a tone of belligerence towards the issues and ignorance of the reports actual recommendations.
Initially welcoming the report Ó Cuív said that the publication of the Oireachtas “comes at a time of severe global economic challenge”, and that “It makes some points which I do not agree with but it is important that collectively we look at all aspects of the challenges we are faced with”.
Ó Cuív bizarrely continued with the claim that, “It has become common in our society to play the blame game and to expect somebody else to solve every problem” and that, “We can only solve the problems, however, if the people are motivated and encouraged to become part of the solution”.
Then came the core of Ó Cuív’s analysis when he said that, “I trust we can all agree on the fundamental point that the western region is intrinsically a good place to live”,  and that, “There is no deprivation in rural Ireland on a community level like that faced by those in urban areas”.
Ó Cuív also said, “I often wonder how anybody could be expected to come to this region if it is as bad as people say it is” and “I developed industry from the ground up when we did not even have telephones”.
At times in Ó Cuív’s address you could be forgiven for thinking Fianna Fáil had never been in government and certainly not for 19 out of the last 22 when he said that, “It is extraordinary that, historically, the most overlooked natural resource is the ocean. Many people are unaware that Ireland has a larger sea area than land area”.

DOHERTY COMMENDED
Fine Gael Senator Jerry Buttimer welcomed the report congratulating Doherty on the work he did, “compiling this significant publication” and he recognised, “the level of research, time and effort invested in its production”. Most importantly Buttimer accepted that, “The report demonstrates the strong potential in the regions for development, but in many cases that potential has been ignored”.
Independent Senator Joe O’Toole also welcomed the report as did Fianna Fáil’s Brian Ó Domhnaill. Ó Domhnaill also welcomed the idea of a cross-border or combined university in the North West.
Labour Senator Dominic Hannigan commended Doherty for “the significant amount of work and commitment” that went into the report on awakening the west.  He said it was a “fantastic and worthwhile report” and that “It is clear, concise, realistic and full of recommendations that would make a considerable impact if enacted”.
Hannigan said that, “Rural communities, particularly those in the west, will probably not spend much time lamenting the death of the Celtic Tiger”.
Fine Gael Senator Fidelma Healy Eames complimented Doherty for “putting the West on the agenda”. It was, she said “time this was done”.
Highlighting the infrastructure issue she said, “Broadband is required, like the air we breathe, for business and leisure” and that “How can we be truly competitive without this?”
When Pearse Doherty finally got to speak he first took Ó Cuív to task saying that, “He is factually incorrect in stating that I only visited one island off the west coast during compilation of the report” and that “If the Minister names the ‘Golden Circle’, I will name the islands.
Doherty also said that, “I am not sure whether the Minister or his officials have read the report, which is disappointing” and that “The report is bigger than all of us – it is about a vision for the west of Ireland that requires us to work together. I was somewhat disappointed with the Minister’s tone”.
Doherty stressed that, “I tried to deliver a fair and balanced report. I do not know that it is possible to argue with any factual point it contains. Most of the information came from departmental officials whom I met in drawing up the report.”
The most important element of the report was according to Doherty that  “We need structural reform in terms of the West”, and that “It is not about what will happen to a particular road or project, it is about a bigger vision.  Regional development” he concluded “is not a central part of the national development plan and it needs to be”.