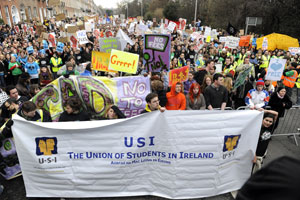 FIFTY Ógra Shinn Féin activists took part in last week’s student march against college fees in Dublin, organised by the Union of Students in Ireland (USI).
Students marched from the Garden of Remembrance  to Leinster House where they held a rally.
In total, 15,000 took part in the demonstration, voicing their anger at the proposed reintroduction of fees for university by Education Minister Batt O’Keeffe.
The march brought traffic to a standstill and Ógra Shinn Féin activists scaled a statue on O’Connell Street to display an anti-fees banner.

FUTURE
Sinn Féin Senator Pearse Doherty spoke to the crowd gathered at the gates of Leinster House:
“Budget 2009 was a black day for Ireland’s education system. Primary school class sizes increased, school transport costs nearly doubled, youth supports for pupils from disadvantaged areas were reduced, adult education grants were also cut, as was investment in information technology, supports for summer courses in Irish colleges were reduced, and the student registration fees were increased.
“Yet, despite this short-term approach, the Government continues to tell students they are the economy’s future. “The reintroduction of third-level fees, as mooted by Minister O’Keeffe for some time now, will act as the final nail in the coffin of free education.”

Student protest: Thousands of  students from around the country protest against the student fees in Dublin city centre