New book: 'Sinn Féin and the Politics of Left Republicanism' 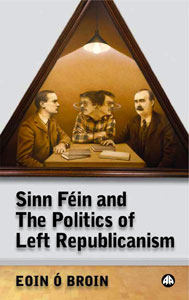 A NEW BOOK, Sinn Féin and the Politics of Left Republicanism, by An Phoblacht columnist and Sinn Féin activist Eoin Ó Broin, is set for release next week in Dublin and in Belfast.
Published by Pluto Press of London, the book is a critical analysis of the past, present and future of Sinn Féin and ‘left republican’ politics.
The premise of the book is that, despite the growth of the party in recent years, Sinn Féin is much misunderstood and often misrepresented.
Speaking to An Phoblacht this week, Ó Broin said:
“I wanted to write a book which, on the one hand, told the history of Sinn Féin and left republicanism from its origins in the 18th century to the present while, at the same time, offering a critical analysis of the strengths and weaknesses of the left republican project.”

CHAPTERS
The book is divided into four chapters.
Left Republican Origins explores the history of the United Irishmen, Young Ireland and late 19th century socialists.
The Arrival of Left Republicanism takes a critical look at Connolly’s Irish Socialist Republican Party and asks why this project was such a political failure.
Left Republican Interventions looks at various left republican forces during the 20th century, including Liam Mellows, the Republican Congress, Clan na Poblachta and the Workers’ Party/Democratic Left. Again, the author explores why each of these projects failed to develop into significant long-term political projects.
The book’s final chapter, A Century of Struggle, charts the history of the Sinn Féin party from Arthur Griffith to the present.
Ó Broin again asks why left republicanism failed to become dominant within the broader nationalist movement or indeed in the country as a whole. He also explores the relationship of Sinn Féin’s nationalism to its socialism, and issues of class, gender and the party’s attitude to unionists.

HISTORY LESSON
The book’s conclusion, The History Lesson, looks to the future and asks how Sinn Féin can become the dominant political force in Ireland.
“The vast majority of books on republicanism,” Ó Broin says, “are written by non-republicans. This does not diminish the value of books by such authors but it is time that we started to engage in the debate about our own past, present and future in a more analytical, critical and reflective way. To do so can only strengthen our ability to advance the struggle for a 32-county democratic socialist Ireland.”
The Dublin launch of Sinn Féin and the Politics of Left Republicanism will take place on Monday 16 February at 6pm in the Pearse Street Public Library, 138-144 Pearse Street. Councillor Daithí Doolan will chair the event and Sinn Féin MEP for Dublin Mary Lou McDonald will speak. The Belfast launch will take place the following Wednesday, 18 February, at 7pm in Lecture Theatre 2, St Mary’s College on the Falls Road. Sinn Féin Mayor of Belfast Tom Hartley will chair and former Hunger Striker Dr Laurence McKeown and Queen’s University Belfast Professor Richard English will speak.
An Phoblacht
44 Parnell Sq.
Dublin 1
Ireland