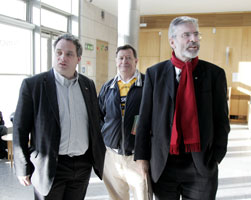 A PARENTS’ drugs awareness pamphlet written by Dublin South Central TD Aengus Ó Snodaigh was launched by Sinn Féin President Gerry Adams in Ballyfermot last week.
Speaking at the launch on Friday, 6 February, the Sinn Féin leader accused the Government of pursuing a political philosophy which protects the wealthy, pours money into the banks, bails out property developers and speculators while increasing the tax burden on the less-well-off, noting that the Government is “promoting policies which will drive more and more people into greater hardship and poverty”.
Adams described the Taoiseach’s claim the previous night that the standard of living of citizens could fall by 10-12 per cent as “evidence of the disastrous impact government policies are having on ordinary people”.
The launch of the drugs awareness pamphlet was one of a number of engagements Gerry Adams undertook on Dublin’s southside on the day.
Adams said:
“For those who have substantial incomes, a drop in living standards of the kind predicted will have little effect.
“But for the majority of citizens, for those on low incomes or middle incomes, the elderly and lone parents, the policies this government is pursuing will cause enormous hardship and drive many people into poverty. Indifference, incompetence and a failure to plan for the future are what characterises this government.
“What is needed is investment in public services, and a job-creation strategy which fast-tracks business start-ups, grows our indigenous export market, and develops and supports a truly innovative culture.”

ALCOHOL ABUSE
Commenting on the drugs pamphlet Adams said;
“Drug and alcohol abuse is a serious problem throughout Ireland. In many areas, especially economically deprived areas, drugs have taken a stranglehold, resulting in broken families, wasted lives and disempowered communities.
“At a time when we face a severe economic crisis there is a danger that the drugs and alcohol problems could grow worse. It is also likely the Government will slash frontline services dealing with these issues. This would be unacceptable.”
Stating that “drugs dealing and drug addiction are nationwide problems which need an all-Ireland response”, Adams said that what is needed is:-
•     A robust and effective crackdown on the criminal gangs who control the drugs trade;
•     More resources for prevention, education, treatment and rehabilitation;
•     The major drugs traffickers must be pursued relentlessly and funds seized from them by the Criminal Assets Bureau (CAB);
•     These funds should be allocated for community development in those neighbourhoods worst affected by the drugs problem.

INFORMATION
Aengus Ó Snodaigh TD said the drugs awareness pamphlet is the first in a series of information pamphlets Sinn Féin will produce for distribution to parents and community groups across the country.
“This pamphlet is an introduction to make both parents and young people aware of the dangers of illegal drugs and the tell-tale signs of abuse. It also provides a list of contact details for local support services, addiction treatment centres, counselling services and the new ‘Dial to Stop Drug Dealing’ freefone line.
“This pamphlet will be followed by further helpful pamphlets on alcohol abuse, gambling and dealing with personal debt.”
Ó Snodaigh has said that the annual crime statistics published that day showed that tackling drug crime must be the number one priority for gardaí.
“While a variety of crime decreased in 2008, drugs offences increased by 25 per cent and firearms and explosives offences also increased by over 10 per cent in the year. If ever there was a clear message to government as to where policing priorities should lie, this is it.
“The Garda resources currently being spent on the security operation in Bellinaboy, County Mayo, amounts to more than half the total budget of Operation Anvil aimed at the drugs gangs. This is untenable. Clearly there needs to be a re-prioritisation.
“Sinn Féin has consistently called for drugs and gun crime to be named as the number one priority in the annual policing plans of the Garda. Today’s statistics affirm our calls.”