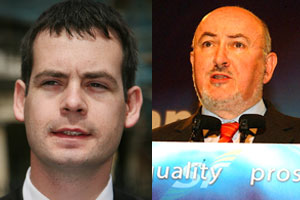 SINN FÉIN Dáil leader and spokesperson on Children Caoimhghín Ó Caoláin TD has called for the immediate reversal of a decision by Education Minister Batt O’Keeffe to take special teacher support from up to 900 children with special needs in the 26 Counties, slashing 128 special teaching posts and taking special needs teachers from 119 schools.
Deputy Ó Caoláin said:
“The cutting of special needs teachers for some of the most vulnerable children in our schools is shameful and disgraceful. It flies in the face of all the rhetoric from the Government about their commitment to early intervention to address special educational needs. It is a blow in particular to disadvantaged schools and to efforts to address poverty with long-term educational strategies.
“This cut is a betrayal of children with special needs by Fianna Fáil and the Green Party. In 2005 Sinn Féin tabled a Private Members motion in the Dáil highly critical of the system of allocating special needs teachers, a system that has now been used to cut vital resources based on arbitrary numbers. The Green Party TDs supported our motion. Now they are standing over this shameful cut.
“During the course of the debate on 22 February 2005, the then Education Minister Mary Hanafin said of the then Finance Minister, Brian Cowen:
‘The Minister for Finance is obliged to have due regard to the State’s duty to provide for an education appropriate to the needs of every child under the Constitution and the necessity to provide equity of treatment for all children.’
“The Minister for Education and Science Batt O’Keeffe should now reverse his decision.”
Meanwhile Sinn Féin Education spokesperson Senator Pearse Doherty has described the cuts as unjustifiable. Doherty said the special educational needs of children with learning difficulties cannot be met in mainstream classrooms as has been claimed by a Department spokesperson.
Speaking on Wednesday Doherty said: “I have today tabled a Parliamentary Question on this to see exactly what impact these cuts will have.
“These pupils will be moved into already overcrowded mainstream classrooms where they will receive little support with their learning difficulties. The effect of these unjustifiable cuts will be detrimental to all children in the classroom.
“Our vulnerable children should not pay the price for this government’s failures. This is one in a long line of attacks on those most in need by this government. To announce that these children’s needs would be catered for in mainstream classrooms is a lie.
The Minister for Education and Science Batt O’Keeffe gave a grand speech in the Seanad last night about the need to invest in our education system in order to pull Ireland out of its current economic mess. He boasted about his and his department’s ‘achievements’ since he came into office. However not once did he mention what was in store for our schools this morning.
“The minister and his department are a failure. They have failed the students. They have failed the teachers and they have failed and attacked those who are most in need of help. Shame on minister Batt O’Keeffe.
“This latest attack must be reversed. It is wrong and it is shameful and the Minister should be brought to account for his actions.”