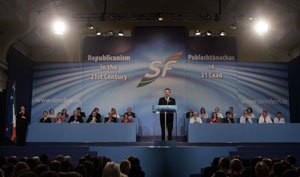 SPEAKING to An Phoblacht in the lead up to the Sinn Féin Ard Fheis, the party’s General Secretary Rita O’Hare says that the event promises to be very upbeat and forward looking.:
“The theme is A Vision for Ireland’s Future and that incorporates issues like, peace, justice, unity and equality”, she says.
“The current situation in Ireland highlights Sinn Féin’s status as champion of equality in all its meanings. We have come through a difficult year.  The pace of change North and South has been slow  – change in terms of improving people’s lives in economic terms, the promotion of the Irish language, in defending people worst hit by the economic downturn. But in all these areas Sinn Féin has clearly been to the fore.
“Sinn Féin was the only party to oppose the Lisbon Treaty, again defending the rights of Irish people and defending the provisions of the Irish Constitution particularly in relation to neutrality.
“The Ard Fheis will very much reflect not just the past year but the year we’re entering and how Sinn Féin must equip ourselves to continue to grow and continue to protect and represent the interests of the people.”
Rita anticipates a very large turn out this year particularly in the aftermath of the hugely successful Céad Dáil commemorative events held by Sinn Féin in January.
“We just had the commemoration of the First Dáil, a resounding success which attracted a massive turn out  – people who wanted to see that anniversary properly marked.”
John Douglas of the Mandate trade union will be  a guest speaker at this year’s Ard Fheis.
Rita O’Hare is encouraging people to avail of the crèche facilities, which will be provided for the weekend and stresses the importance of registering for the service in advance by contacting head office, “so that we can make appropriate provision by way of the number of care workers that will be required.”
There will also be ready availability of translation equipment to enable Gaeilgeoirí to be understood by everyone in the hall.
“Microphones for translation purposes will be distributed around the hall for those requiring them.
“There will be the usual stalls, the Sinn Féin stall, the An Phoblacht stall and a trade Union stall.
“This Ard Fheis will be a positive and uplifting event with a celebratory atmosphere similar to that at the Céad Dáil celebration and we urge everyone to come and join us.”