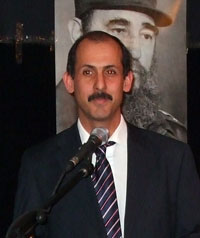 CARRILLO: Revolution of peasants and the poor

A revolution of the peasants and the poor

THE 50th anniversary of the Cuban revolution was celebrated in Liberty Hall in Dublin last Friday night. It was a colourful evening of music and song with the walls strewn with pictures of iconic images of when Fidel and Che brought freedom to the island. As well as praising the revolution, the event raised funds for Cuba’s Hurricane Relief Fund.
Frances Black, Liam Ó Maonlaí, Cormac Breathnach and a host of Latin American artists set the stage for the speakers, Sinn Féin President Gerry Adams, SIPTU President Jack O’Connor and Cuban Ambassador Noel Carrillo.
Gerry Adams pointed out that there are very strong ties between the people of Cuba and the people of Ireland. Apart from Che Guevara’s obvious connection through the name Lynch in his lineage, Adams added:
“During the Cromwellian period, 50,00 Irish people – men and women but mostly children – were transported to the Caribbean, to Barbados and that part of the world as slaves.”
Adams cited James Connolly, who once spoke about internationalism being founded upon a free federation of free peoples.
“I think that in many, many ways what the people of Cuba have done in terms of their internationalism has been mighty.
“There are at this time in the world thousands of people who have been educated, who have become doctors trained in Cuba. At any time, in different parts of the developing world, we find that there are Cuban doctors and others working in places where otherwise people wouldn’t have a chance of getting that standard of medical attention.”
Adams recalled a visit he paid to Cuba with some comrades on the anniversary of the Hunger Strikes, back in 2001. He met Fidel.
“He was mesmerised by the Irish language and he wanted to hear what the Irish language sounded like.”
The audience were flung into peels of laughter as Gerry went on to recount the scene of Fidel and himself reciting the Hail Mary. “Fidel asked us to say the Hail Mary in Irish and he said it in Spanish.”
Adams was astonished by Castro’s knowledge of Ireland. Fidel was, as Adams put it, “almost forensic” in his desire to know more about Ireland.

TO SURVIVE
SIPTU President Jack O’Connor said that Liberty Hall was a most appropriate place in which to celebrate the Cuban Revolution and the event caused him to reflect on what it was all about.
“I came to the conclusion, somewhat belatedly, that the greatest achievements of the Cuban revolution were those which were recorded after the fall of the Soviet Union and not prior to that because, when you think it through, the actual greatest single achievement of the Cuban Revolution was the fact that it has survived for 20 years after the fall of the Soviet Union despite the embargo imposed by the greatest economic and military power on earth. It’s not that it survived as a political entity, it’s that it survived as a human revolutionary process.”
Besides the more material proofs of the success of the Cuban Revolution, O’Connor identified the core lesson of the Cuban story.
“They have disproved the fundamental tenets of neo-liberalism. They have disproved the notion that it is necessary for humanity to survive, for civil societies to survive and progress, to employ all the vices of the free market system.”

SECRET
Cuban Ambassador Noel Carrillo said:
“We have a very similar history Ireland and Cuba: a history of long periods of colonisation, an attempt to banish a whole nation. In the case of Cuba, when the revolution took place it was a revolution of peasants and the poor for social justice. That was the main reason for the revolution. Practically the whole economy was in the hands of American companies – especially the land, which was in a very few hands.
“Our peasants and workers were submitted to the most horrendous exploitation in our continent. So the revolution gave the workers the right to own the factories and gave the peasants the right to own the land and their production.”
One of the biggest challenges for Cuba was the elimination of illiteracy, he said.
“We had a big campaign to eliminate illiteracy. And later on we started to develop the minds of our people. We don’t have large economic resources; our main resource is the human capacity to develop the country. So we develop the human resources in our country.”
And he let everyone in Ireland in on a little secret.
“Somebody asked me what is the secret of the revolution to keep its vitality for the last 50 years and have plans for the future. I don’t think I’ll put the revolution at risk by telling you the secret of its success: maintaining unity and social justice and promoting human values and solidarity.”