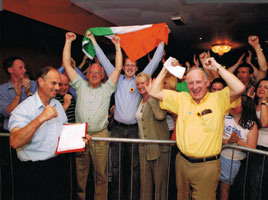 IN THE THICK OF IT: Tommy Devereux celebrates election victory for Cllr Noel Campbell (with Tricolour) and ex-POW Joe McHale with a clenched fist on one hand and a clipboard in the other

Holding it all together

TOMMY DEVEREUX is a very prominent republican in Connacht and, as one local Sinn Féiner told ELLA O’DWYER, “Sure, he was the one that held it all together.”
While Tommy is very well got in republican circles throughout Ireland, he makes light of his contribution to the struggle.

TOMMY DEVEREUX (76) was born and raised in Castlebar, County Mayo, where the family ran a small building company. There was no trace of republicanism in his background. Pondering as to its source in himself, he says: “I often try to figure out where I got it from.”
He went to the local primary and vocational schools but had no passion for study.
“I hated every second of school. I didn’t want to know anything about it at all. I left when I was 17 and went to work with my father on the building sites. Then, after that, I got a job with the Fire Brigade.”
Tommy was a keen cyclist and a middling hurler.
“I did a bit of hurling but I wasn’t any good at it. In fact, I wasn’t any good at anything,” he maintains.
I counter: “You’re being modest.”
“No,” he persists. “It’s a fact.”
Whether it was modesty or caution, another ‘fact’ was that I was hard-pressed to get this man to say anything about his achievements in any field – the hurling field or any other field, if you know what I mean. Tight-lipped isn’t in it.
So, being the wizard journalist I am I went behind his back to someone else for comment.
“Sure, Tommy Devereux was the one that held it all together here. He was essential to the progress of the Republican Movement in this part of the country,” says local republican Seán Ó Murchadha.
Tommy Devereux, despite his modest self-evaluation, was very good at a lot of things and was central to the organising of the Republican Movement in the West of Ireland in the 1970s – not least in helping train a new generation of freedom fighters. But, as he says himself, “That’s for another day.”
Tommy got involved in the Republican Movement in 1953.

I was hard-pressed to get this man to say anything about his achievements in any field – the hurling field or any other field, if you know what I mean. Tight-lipped isn’t in it

“At that time you did the bits and pieces,” he hints. “There would be different people calling and that,” he adds a little, going on to make it very clear that he wouldn’t be talking about any of those ‘bits and pieces’.
“All that’s for another time,” he says firmly. “It’s too early to be writing it down. We’re not finished with the struggle yet.
“I’m a hundred per cent behind Gerry [Adams] and the leadership – a hundred per cent – but it’s all not bedded down and for that reason I’m not going writing things down or telling anybody what I did.”
And there are others, he reminds me periodically throughout our interview.
“We’ve some great people here in Connacht and throughout the country.”
For Tommy, one of the more special republicans was one of last year’s honourees: Brian Keenan.
“Brian was very special and he was my best friend. I met him in 1970. He had to ‘fly out of town’ one day and somebody brought him to our house and we – me and my wife, Ann   – were very, very close ever since. She’s also very republican but, as I say, all that’s for another time.”
Throwing the focus off himself again, he refers to another special person: ex-POW Martina Anderson.
“I met your friend, the little Derry lady Martina, a long time ago. And what part of Tipp are you from yourself.”
I have to remind him that I’m asking the questions and he’s supposed to be answering them! Reluctantly, Tommy returns to talking about himself.
“I would have done work supporting the POWs – in fact, anything that was going I was at it,” he admits. And just as I think I might get him to ‘talk’, he reverts to modesty mode, saying:
“I don’t know what the criteria for these Le Chéile awards are but I think there’s a lot of others that should be before me.”
By now it’s evident that Tommy Devereux would have had no problem withstanding interrogation in any barracks but I was also detecting a droll sense of humour.

Brian Keenan was a part of all our lives
– Tommy Devereux

“I was in jail a few times,” he acknowledges, “for selling Easter Lilies, so I qualify as an ex-prisoner too,” he laughs, adding mischievously “When I’m with republican friends in Belfast and I look around at ex-POWs, some of whom served 10, 15 or 20 years, I tell them I qualify as an ex-POW.”
Does he think he’ll see a united Ireland before he dies?  “A united Ireland – I’d be prepared to wait around for that alright.”
But Tommy isn’t sure if it will happen in his lifetime.
“It mightn’t come in my time. Mind you, since I got confined to a wheelchair I’m not as much in the loop as I used to be in terms of meeting people to discuss developments.”
Tommy lost the use of his legs in recent years when a clot developed in his body during a minor operation.  It was hard for him to, as he says, “get my head around that one” but it doesn’t seem to have knocked him back in terms of motivation, spirit and humour. He has a wicked way of winding you up.
“This is the hardest phase of the struggle,” he continues. “We went through dangerous and hard times but these times bring their own challenges. Now I’ll put the hair standing on the back of your neck when I say this,” he continues. Great, I thought – I’m getting the beef at last, but no. It was “the women thing”. Here we go, I thought.
“We have great women but we shouldn’t just stand women for the sake of it. If a man has a better chance of getting a seat in an area there’s no reason why we have to put a woman forward just because she’s a woman.  And I’ve met great women in the Movement who agree with me on that.”
I know a few great women who might not but again, as Tommy himself says, that’s for another day.
Returning again to his great friend Brian Keenan, Tommy says:
“The last time I saw Brian was a day or two before he died. He was a great republican and a great man – Brian was a part of all our lives.” And, in a funny way, although I hadn’t met Tommy Devereux before, I could see why he too is part of many people’s lives.
With his devilish wit and admirable frankness, he’d grow on you fast.
While he might be a bit of a reluctant honouree I gather from sources known and ‘sources unknown’ that Tommy Devereux has played a major part in the republican struggle in Connacht. But, of course, “that’s for another day”.