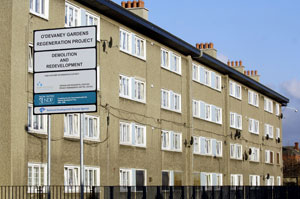 IT’S a case of “one step forward, two steps back”, according to Sinn Féin Councillor Críona Ní Dhálaigh for the communities in five urban regeneration areas across Dublin’s inner city as a new  council task force has failed to break the log-jam of a ten-year delay in providing an adequate living environment for some of the most disadvantaged communities in the capital.
The redevelopment of five sites in Dublin was halted last year after developer Bernard McNamara pulled out of Public Private Partnerships (PPPs) to invest €900m and build 1,800 homes on key sites north and south of the Liffey.
The proposed developments of housing, commercial units and other amenities were are at O’Devaney Gardens (Dublin 7), St Michael’s Estate (Dublin 8), Dominick Street (Dublin 1), Bridgefoot Street (Dublin 7) and Seán MacDermott Street, (Dublin 1). Another PPP project at Croke Villas (also in Dublin 1 and right next to Croke Park Stadium) was also abandoned by Dublin City Council in December last year.
The McNamara PPP pull-out happened in May 2008. At the time, the scale of the problem came as complete shock to city councillors who, because of the secrecy of the PPP tendering process, did not know that McNamara Construction and its partner, Castlethorn, had emerged as the key developers in five separate sites.
The community-based regeneration boards had wanted real transparency in the tendering process and proposed an independent representative to help achieve this but were knocked back by the council. The tendering process was commercially sensitive so the communities and even Dublin City Council’s elected representatives did not have any information about the bidding process.
“We only knew when the deals fell apart that McNamara was involved in them all”, said Ní Dhálaigh, who told An Phoblacht:
“We could spend ages going into the blame game but residents are suffering.”

COMMITMENTS
This is where Sinn Féin Councillor Christy Burke has put his focus, working tirelessly for disappointed residents and tackling pragmatically the outcome of failed PPP developments in his Dublin Central constituency.
Christy Burke told An Phoblacht:
“We pursued the council and got the minister to visit the area. Now we have got commitments for up to 70 units in O’Devaney Gardens and 20 in Croke Villas.”
These new promises on social housing units are part of a wider Dublin City Council response to the PPP collapse. They have abandoned the PPP process but formed a Housing Task Force.
Críona Ní Dhálaigh pointed out that, despite council motions put down by Sinn Féin for greater representation on the task force, it wasn’t granted. There are no community representatives on the task force, said Ní Dhálaigh, and even councillors are excluded.
The task force has produced a preliminary report and in December Dublin City Council proposed allocating €8.5m from its annual capital allocation in 2009 to make an immediate start on the regeneration of St Michael’s Estate, Dominick Street and O’Devaney Gardens.
The council admitted: “The projects are no longer viable under the Public Private Partnership process.” This doesn’t meant that the regeneration process will be quick or on the scale of the original proposals. €8.5m is nothing close to the original €900m investment or the €27m already spent by the council in the failed PPP projects.
Speaking at the council meeting where the Housing Task Force report was launched, Ní Dhálaigh said that although she welcomes the report with a note of caution, it is ironic that the mechanism now being used for the delivery of the regeneration is one that was available to us from the beginning. “PPPs are dead  – they are a flawed ideology.”

STEP DOWN
Ní Dhálaigh also noted that the new proposals are a huge step down from the original plan to build 720 units in St Michael’s, which would have included 165 social housing units, 70 affordable, 480 private, along with a library, a family resource centre, a youth café, childcare facilities and a 200-seat civic centre. Ní Dhálaigh says it is “crucial that the physical redevelopment is not decoupled from the social regeneration of the estate”, adding that this was the actual priority of the City Council development plan.
There will also be further delays in when the building will actually start.
Ní Dhalaigh said that in St Michael’s, which was the €265m flagship development in the PPP projects, it will be 2010 before they turn a sod in the first phase of the new down-scaled development project and the council is only planning to develop two acres in the first phase of building before moving on to another two-acre site while the largest 10-acre site will remain derelict.
Delays are nothing new, according to Ní Dhálaigh, who said that she knew of no housing PPP in her area of Dublin that has successfully completed the second phase of development.
This worry is making Ní Dhálaigh concerned about another massive PPP project: the proposed regeneration of the 9.5 acres at St Theresa’s Gardens.
The local regeneration board there has been told that there are four bidders for the project. Despite all the problems with the McNamara bids, Ní Dhálaigh says:
“We still don’t know who they are, even though the council is beginning to de-tenant some of the existing flats complexes.”
The problem with all of these delays, according to Ní Dhálaigh, is that communities are being lost. The Sinn Féin councillor cited the example of the recently-demolished Chamber Court and Weaver Court flats complex on Dublin’s Cork Street, where the existing community has been dispersed and broken up.

There were in the same part of Cork Street 1,100 apartments built in private developments where “not one went to Part 5 social housing allocation”. These apartment complexes are “transient housing”, according to Ní Dhálaigh, who said that in order to build communities in the inner city people need to set down roots and that in the older, public sector flats complexes you have families spanning two and three generations.

McNAMARA GETS GO-AHEAD
It seems there is one set of rules and timescale for social housing in Dublin and another for private sector developments.
In the same week that Bernard McNamara pulled out of the €900m PPP projects, he received the go-ahead for a €1bn construction project in Dublin 4 on the site of the Burlington Hotel. McNamara will build a 33,300-square-foot commercial complex of offices, restaurants, shops, apartments with a leisure and a medical centre.
The core reason for abandoning the PPP projects was a Dublin City Council planning guideline change to increase apartment size by 25 per cent: the minimum size for an apartment now built in the city will be 85 square metres. Thousands of the new apartments built around the city in the tax relief incentive schemes are nearly half the new size. It makes you wonder how big the penthouse in Bernard McNamara’s Burlington, Dublin 4, development site will be.
Críona Ní Dhálaigh is right. Public Private Partnerships are a flawed ideology, as was surrendering huge parts of Dublin to the whims of private-sector property developers. The future of affordable housing in Dublin must be brought back into public hands.