O'Connor warns of industrial action 'on a dramatic scale' 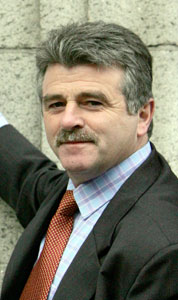 THE Irish Congress of Trade Unions is to begin a series of major demonstrations on 21 February following an unprecedented reaction to the government’s controversial and deeply unpopular pension levy.
ICTU announced the move following a meeting of its Executive Council on Wednesday.
Congress says it has developed a 10-point plan for national recovery that will help address the problems in the Irish economy.
ICTU General Secretary David Begg said that several major demonstrations will be held, kicking off on Saturday 21 February.
Trade union leaders from the public and private sectors met on Wednesday to consider their response to the Government’s action in the wake of the collapse of partnership talks last week.
The meeting of the Irish Congress of Trade Unions’ executive council came after SIPTU General President Jack O’Connor warned that industrial action on a “very dramatic scale” was a real possibility.
O’Connor said widespread action rather than a simple “walk around town” would be needed to defeat “an attack on workers across the economy”.
He said industrial action would only be taken as part of a unified union campaign against such attacks, which began with construction employers’ demand for a 10 per cent drop in workers’ wages.
Jack O’Connor said the campaign had been followed up by employers’ group IBEC when it called for a deferral of the national wage agreement and then the Government through its imposition of the pension levy.
Those behind the attacks had attempted to pit private sector workers against public sector workers.
O’Connor, said a “relentless” campaign had to be pursued so that economic recovery was achieved in a fairer way.
Impact general secretary Peter McLoone, has also not ruled out widespread industrial action. He accused the Government of reneging on its commitment to spread the €2bn cutbacks across the economy, adding that there had been unprecedented reaction to the levy, which was “laced” with inequalities.
The four teachers’ unions said they “abhorred” the levy “pay cut” and would devise a strategy on Monday.
Protests were announced even before Wednesday's meeting. The Executive Committee of the Civil, Public & Services Union (CPSU) which represents  lower-paid civil servants met earlier this week and has decided to ballot its members for industrial action. According to the CPSU, over half of their members have directly contacted their offices or representatives to express their anger over the government’s actions. They will ballot for a strike across the Civil Service. The CPSU also plan to hold a lunchtime protest outside the Dáil on Wednesday, 18 February and are encouraging all their members to attend.

WELCOMES ANNOUNCEMENT
Sinn Féin Finance and Workers’ Rights Spokesperson Arthur Morgan TD has welcomed the ICTU announcement on Wednesday. Morgan said there is widespread anger among workers at the Government’s handling of the economic crisis and specifically its continued targeting of vulnerable sections of society.
Speaking after ICTU General Secretary David Begg made his announcement Arthur Morgan said, “I welcome today’s announcement from ICTU.  It is only right and proper that working people are provided with an opportunity to vent their frustration at the current economic situation and the Government’s performance in relation to it.
“There is huge anger and dissatisfaction out there at the Government’s handling of the economic crisis. When we see discredited bankers getting golden handshakes and huge pensions while working families and vulnerable sections of society are being forced to pay for their mistakes it is only natural that people will be angry. This anger is compounded even further by the fact that speculators, who made many millions of euros during the Celtic Tiger years, have not been made to pay their fair share.
“It is particularly important that workers from both private and public sectors stand together at this time amid attempts by the Government and employer organisations to pit them against each other. The pension levy on public sector workers is but an indication of what is to come for all workers regardless of what sector they work in.”