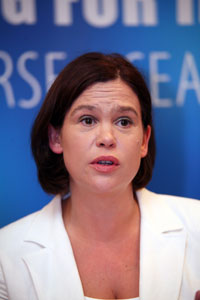 DUBLIN MEP Mary Lou McDonald led a Sinn Féin delegation to meet with National Bus and Rail Union (NBRU) union leaders in Dublin’s City Hall on Tuesday to discuss the decision by Dublin Bus to reduce its fleet by 120 at the cost of 290 jobs.
McDonald was joined by Dublin TD Aengus Ó Snodaigh, Dublin City Councillor Larry O’Toole, who sits on the council’s Transport Committee, and Councillor Daithí Doolan, who was representing the party’s Trade Union Department.
Mary Lou McDonald said:
“Today’s meeting with the NBRU was productive and gave myself and my party colleagues a deeper insight into the impact of the decision by Dublin Bus to withdraw over ten per cent of its service to the capital city.
“This is a bad decision for workers, the people of Dublin, for public service delivery, for the environment and for the city’s sustainability. It is also an indictment of the Government’s refusal to properly invest in and influence through progressive policy the capital city’s public transport service.
“Dublin should have a first-class, affordable, integrated public transport system. We don’t and the blame for this lies with successive Fianna Fáil governments who have for decades mismanaged public monies.
“Transport Minister Noel Dempsey’s inaction to the Dublin Bus decision has been shocking. It is completely inappropriate for a Minister for Transport to abdicate his responsibility in such decision-making.
“This matter is not solely the ‘responsibility of management and unions’. The Government, as the holder of the public purse which pays for such services, is a key stakeholder whose policies shape the delivery of the country’s transport system.
“This decision is also bad news for the environment. Ireland made commitments alongside its European partners in December to cut its greenhouse gas emissions by 20 per cent by 2020. Clearly the Government, despite the influence of the Green Party from within its ranks, has little intention of honouring these commitments.
“Dublin City and indeed Ireland can and should have a 21st century integrated public transport service. Government needs to frontload infrastructure projects that can employ workers from the construction sector and increase our competitiveness; such infrastructure projects should include public transport.”