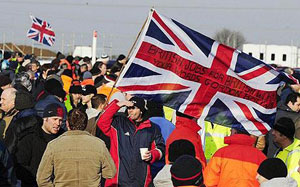 THE backdrop to the strikes and protests by construction workers in Britain in the past couple of weeks is, of course, the disastrous recession that is causing unemployment to spiral throughout Europe and much of the rest of the world. New figures show there are now two million people out of work in Britain.
The dispute began at the Lindsey Oil Refinery in Lincolnshire, England, on 28 January, operated by Total Oil. Building contractors were told that the new sub-contractor, Italian company IREM, was refusing to allow British workers to apply for jobs but that 200 Italian and Portuguese workers had been recruited under its contract.
The Italian and Portuguese workers were to be kept segregated from the unionised local workforce – living separately on accommodation barges, working different shifts and being bussed to and from the plant each day.
The fight for work, for jobs to be open for all to apply, and to prevent the potential under-cutting of hard-won union pay rates and conditions will be vital to protecting the rights and living standards of working people during this recession. But the target of the strikers’ anger and demands in this case appeared ambiguous – was it Total Oil’s practices and British Government and EU policy, or was it the Italian and Portuguese workers themselves?
The unfortunate central slogan of the Lindsey wildcat strikes – “British jobs for British workers” – failed to identify the cause of the workers’ problems and directed the blame for unemployment onto migrant workers, whether this was the intention of the trade union leaders or not.
The deal struck between the Unite trade union leadership with Total Oil was very positive – it did not displace any of the migrant workers, it apparently secured equality of access to the jobs for British workers, it guaranteed that National Agreement for the Engineering Construction Industry  rates would be paid to all workers, regardless of nationality, and that the segregation of workers would be ended.

DISCRIMINATION
But the outcome in this case does not change the fact that the logical conclusion of the key demand “British jobs for British workers” is the discrimination against, or sacking of, migrant workers in favour of British citizens and the ring-fencing of jobs against immigrants.
This is why the strikers won support from many unlikely quarters – from the neo-Nazi British National Party to conservative columnists who fear and loathe organised labour about 99 per cent of the time to the DUP’s Sammy Wilson in the North.
While the BNP were reportedly “sent packing” from the picket lines when they showed up, there were also claims of intimidation and abuse of the Italian workers, with media reports stating that a group from Lindsey gathered at their accommodation in the harbour shouting “Go back to Italy!”
Ever-keen to prove his British credentials, Sammy Wilson weighed into the discussion here, urging local companies to give preferential treatment to people from the North of Ireland. Demonstrating his remarkable sensitivity towards migrant workers from Eastern Europe, Wilson said: “Because they have moved once, they can move where the jobs are.”
Sinn Féin MLA and Chairperson of the Employment and Learning Committee Sue Ramsey responded by pointing out that discriminating against people on the grounds of nationality – or any other grounds – is illegal and contravenes equality legislation.
“Sammy Wilson’s comments were racist and dangerous and should be withdrawn immediately. In times of economic downturn it is all too easy to point the finger and build these kinds of arguments,” she said.

UNDERLYING ISSUES
The Lindsey dispute clearly showed the pent-up anger and anxiety felt by workers about their future and their livelihoods. It also showed the absolutely vital need for thoughtful, principled political leadership of industrial disputes in these conditions to combat those forces who would seek to exploit mass unemployment and poverty to foster racism and chauvinism.
In the 26 Counties, unemployment stood at 326,000 people, or 9.2 per cent of the workforce, in January. In the North, there are now 36,000 people out of work. New statistics from the South this week show that migrant workers are losing their jobs twice as fast as Irish citizens.

The problem is not the free movement of workers throughout EU states but rather the conscious pitting of workers from one member state against another in order to undermine wages and conditions – the ‘race to the bottom’, a process the Lisbon Treaty would accelerate if it was adopted

The lessons raised in Britain are very relevant – we need to identify the causes of the unfolding economic disaster and pose real solutions to it, while challenging attempts to scapegoat migrants and divide the working people who are bearing the brunt of the recession.
The real issues underlying the Lindsey dispute are varied and complex and include the sudden and sharp rise in unemployment, which hit the construction industry hardest; the drive towards sub-contracting in the sector; the super-exploitation of workers from eastern Europe and the push by EU companies to use the free movement of capital and labour to try to drive down working conditions in the western European states.

EU AND SOCIAL DUMPING
The free-market policies and financial deregulation of the last several decades are responsible for the economic mess we find ourselves in, and governments have facilitated the casualisation of work. But specific EU directives and legislation have also seriously contributed to the erosion of workers’ rights and conditions by allowing companies to avoid the collective bargaining process and national agreements established in member states.
The problem is not the free movement of workers throughout EU states but rather the conscious pitting of workers from one member state against another in order to undermine wages and conditions – the ‘race to the bottom’, a process the Lisbon Treaty would accelerate if it was adopted.
While under the EU Posted Workers Directive, workers posted by a foreign company to another member state are supposed to be guaranteed the same conditions as local workers, in reality that has often not been the case. The European Court of Justice has repeatedly ruled that posted workers are only entitled to the minimum conditions guaranteed by law in the host country.
The European Trade Union Confederation has described several recent ECJ rulings as “an open invitation to social dumping”. In the Rüffert case in 2008, Viking Line in 2007 and Laval in 2004, the right to take collective action to prevent the exploitation of posted workers by foreign ‘service providers’ was found to be subject to the company’s right to freedom of movement and establishment under the EU Services Directive – a right which the ECJ has repeatedly upheld as being superior to workers’ rights.
The collective action of workers and unions taken against foreign service providers is only allowed if it is “proportional” – that is, in defence of the most basic minimum conditions agreed on by EU bodies or set in law by the host country. What happens if workers want to take collective action in order to improve their conditions? The pattern has emerged where the minimum standards become the maximum.
As the recession pushes many millions more in the EU into unemployment, which will inevitably work in favour of those trying to drive down wages and conditions, the need for state and EU-wide legislation protecting the rights of all workers – especially exploited agency and maritime workers – is stark.
Unions taking collective action to defend members’ jobs in a period of mass unemployment must focus on demanding a job-creation strategy from governments and preventing de-unionisation and displacement of jobs by campaigning to ensure the exploitation of migrant workers cannot take place – not by freezing them out of the workplace or the country but by encouraging full equality and unionisation of migrant workers.