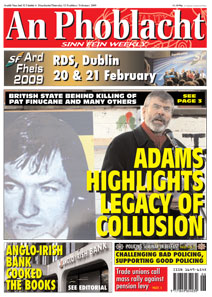 SINN FÉIN West Belfast MP Gerry Adams has accused the British state of involvement in the murder 20 years ago of Belfast solicitor Pat Finucane.
Adams was speaking as he unveiled a mural this week to mark the anniversary of Finucane’s death.
The event which was chaired by Sinn Féin Councillor Marie Cush, was also addressed by Pat Finucane’s brother Seamus and Mark Thompson from Relatives for Justice.
Gerry Adams commended those who designed the mural and all of those involved in organising a series of events this week to celebrate Pat Finucane’s life and to mark his murder by the British state and UDA.
The Sinn Féin leader outlined the extent of collusion between unionist paramilitary death squads and the British state in Finucane’s murder and linked this to the concern of many victims’ families and Sinn Féin about the role of the British state in respect of truth recovery and the recent Consultation Group on the past’s recommendations.
The Sinn Féin President also commended Pat Finucane’s family who, along with hundreds of other families, have campaigned relentlessly for many years for the truth into the deaths of their loved ones, saying that the dignity and courage they had shown is in stark contrast to the behaviour of the British state.
Adams continued:
“Thursday is the 20th anniversary of Pat Finucane’s death. Pat was a good, conscientious solicitor who worked long, difficult hours, under trying conditions, representing his clients.
“He came from a working class background. In fact he and I went to the same school on the Falls Road.
“He was a lawyer working within a unionist dominated legal and judicial process that had been corrupted by years of British manipulation and a succession of new and ever more repressive laws.
“All of this was designed to maximise the power of the state and reduce the rights of citizens.
“Pat was also a husband to Geraldine and a father to three young children. But his devotion to human rights, his diligence in pursuit of his calling and his success even when up against a judicial structure as biased as that which existed in the north of Ireland, had also brought him to the attention of others.

INTELLIGENCE PLOT
“Within the RUC he was a figure of hate. We now know that British intelligence agencies were plotting against him.
“Loyalist death squads, heavily infiltrated by agents and informers were being pointed at him as someone – in their words – to be ‘took out’.
“The extent of this state collusion is illustrated by those involved in Pat’s murder:

•    The leader of the UDA group which carried out the killing was a Special Branch agent – Tommy Lyttle.
•    The man who subsequently confessed to being the UDA gunman who killed Pat Finucane was Ken Barrett, also a Special Branch agent.
•    The UDA man who supplied the gun was William Stobie, a Special Branch agent – later killed in 2001 by the UDA when he threatened to lift the lid on the Finucane case.
•    And the man who provided the intelligence for the killing was Brian Nelson, a British army agent.
•    Pat’s murder also came just weeks after British Home Office minister Douglas Hogg stood up in the British Parliament and claimed that some solicitors in the North of Ireland were ‘unduly sympathetic to the IRA’.

“Nelson, it should also be remembered was centrally involved in the importation of South African weapons in 1988.
“The impact of this weapons shipment, which the British knew about from Nelson, from other agents in the north, as well as in South Africa, is to be found in the statistics of murder.
“In the three years prior to receiving this weapons shipment the unionist death squads had killed 34 people.
“In the three years after the shipment they killed 224 and wounded countless scores more.
“The dramatic rise during this period in the number of Sinn Féin activists and family members being killed can also be traced directly to this fact and to the information the Special Branch and British agencies were passing on to their agents within the unionist death squads.
“In the following six years three Sinn Féin Councillors, 11 party activists, and seven family members, including brothers, sons, spouse and partners were to be killed.
“Many others were to be seriously wounded. Republican homes and Sinn Féin offices became the frequent targets of attacks by loyalist death squads.

CAMPAIGN FOR TRUTH
Since his death Pat’s family has battled for an independent, international public inquiry into his murder.
“They have campaigned tirelessly and have won significant international support, including from the new US President Barack Obama. The British system resists this demand. Why? Because Pat Finucane’s murder and those involved with it highlights the depth and extent of collusion between British forces, unionist death squads and the British political establishment.
“In addition, the role of the British state in Pat Finucane’s murder, and through collusion in the murder of hundreds of other citizens, is one reason why Sinn Féin has serious reservations around the proposal from the Consultative Group on the Past for the creation of a Legacy Commission appointed by the British government.
“This is not the independent and international commission, established by a reputable international body like the UN, that Sinn Féin believes is necessary to properly address this issue.
“Clearly, the British state are protagonists in this conflict, they are not innocent observers.
“It is important therefore that we continue to support the Finucane family in their demand for an independent international judicial inquiry.
The 20th anniversary of the killing of Belfast defence lawyer Pat Finucane is being marked with a series of events in Dublin and Belfast this week.
Finucane’s life will be marked in Dublin’s Trinity College this Saturday, 14 February at a conference commemorating the 20th anniversary of his murder.
While there is a list of high profile speakers due to address the conference, the weekend will also include a tribute to the assassinated lawyer’s passion for sport.
Pat Finucane entered Trinity College on 1968 and later captained the Dublin University Association Football Club. A game is to be played in his honour over the weekend.
Also a bench overlooking College Park will be dedicated to his memory.
As An Phoblacht goes to print, a candlelight vigil will be held close to Pat Finucane’s Fortwilliam home on the Antrim Road, followed by a picket of Belfast’s High Court on Thursday.
On Thursday 12 February  there will be an anniversary gathering at the front of Belfast High Court building. Organised by Relatives for Justice, the anniversary gathering will highlight the Finucane family’s demand for an independent, international public inquiry. The speakers are Sinn Féin MLA Alex Maskey; Mike Ritchie, director of the Committee for Administration and Justice (CAJ); and Monsignor Raymond Murray.
On Thursday evening, St Mary’s College on the Falls Road will host a panel discussion entitled ‘Pat Finucane: Time for the Truth’. Organised by Relatives for Justice, the panelists are: Peter Madden, a friend and legal partner of Pat in the Madden and Finucane legal practice, Seamus Finucane, brother of Pat Finucane, Alex Maskey, Sinn Féin MLA, who was shot by loyalists directed by British agent Brian Nelson who was also involved in Pat’s murder, Jim McCabe, husband of West Belfast woman Nora McCabe who was murdered by the RUC in July 1981. Pat Finucane represented the McCabe family in their campaign for truth and justice.