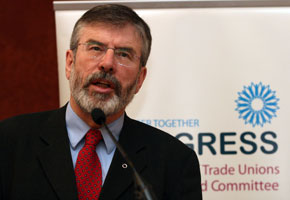 SINN FÉIN President Gerry Adams MP MLA hosted the launch of the Irish Congress of Trade Unions’ ‘Israel Palestine’ report in Parliament Buildings on Tuesday 10 February.
More that 60 people attended the launch, including Patricia McKeown, President of the ICTU and Regional Secretary of Unison; Eamon McMahon and Joe Bowers, from Trade Union Friends of Palestine; and Brian Campfield, Deputy General Secretary of NIPSA. All were part of the trade union delegation that travelled to the region in November 2007.
The report includes first-hand information compiled by the ICTU delegation which visited the West Bank and Gaza. It also includes recommendations for action, including the call for Congress to organise a boycott, divestment, sanctions (BDS) campaign against Israel.

UNDER OCCUPATION
Commending the ICTU for producing the report, Gerry Adams said:
“That this conflict has gone on as long as it has is an indictment of the international community. It has failed to provide the leadership necessary to bring an end to this crisis decades ago.”
Adams called for “a real and sustained international effort to construct a durable peace settlement which provides for two states, including a Palestinian state that is sustainable and viable”.
Patricia McKeown said ICTU had travelled to the Occupied Palestinian Territories “because it was necessary for us to bear witness to the reality of life under occupation for the Palestinian people”.
She said the decision to organise a campaign of economic, political and cultural sanctions against Israel until it obeyed international law and upheld the basic human rights of Palestinians was “the very obvious option to those of us who were involved in the anti-apartheid campaign against the South African regime”.
McKeown pointed out that the ICTU motion supporting a BDS campaign is the strongest and most radical stance on Israel/Palestine of any trade union confederation in Europe and throughout most of the world.
“The fact that our delegation had visited Palestine meant we could bear witness to what we had seen when the British ambassador and then the Israeli ambassador to Ireland approached the ICTU to try to convince us to reverse our decision,” she said.
“While the ICTU is a union federation on a small island, we can use what influence we have to pressure the Irish, British, EU and US governments to hold Israel accountable to international law.”
She said the ICTU would shortly be unveiling detailed campaign plans and working with the Ireland Palestine Solidarity Campaign to build the BDS movement throughout Ireland.
The report can be read at http://www.ictu.ie/download/pdf/palestine_final.pdf