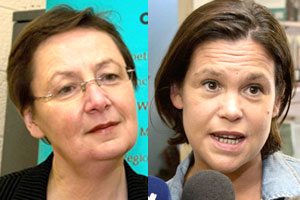 SINN FÉIN Dublin MEP Mary Lou McDonald has welcomed indications from the EU that a dialogue has begun between member states’ governments on the union’s current policy of no engagement with Hamas.
McDonald has called on the EU to also include in this review the suspension of existing preferential trade arrangements with Israel and support for a UN investigation into human rights abuses by Israel during its brutal and devastating military attack against the people of Gaza.
Six County MEP Bairbre de Brún joined my party colleague in welcoming the media reports indicating a possible shift in European policy.
Speaking on Tuesday, Mary Lou McDonald said:
“If true, media reports indicating a possible shift in European policy on Hamas following yesterday’s meeting of EU Foreign Affairs Ministers are to be welcomed. A peace settlement can only be reached through inclusive dialogue. Exclusion does not assist peace building, which is one of the lessons we have learned in Ireland.
“No time can be wasted in seeking to build a lasting peace process. This should be based on direct dialogue, political negotiation and respect for human rights. EU leaders have a responsibility to the people of Palestine and particularly Gaza to do all that they can to ensure such a dialogue takes place. They must back up such actions with a suspension of all preferential trade agreements with Israel until a full investigation into the country’s abuse of human rights abuses has been completed.
“Frustration expressed at EU level on aid to Palestine is justified – funding the building of homes in Palestine only to have Israel bomb and bulldoze whole communities is wholly unacceptable. It must be clear to all EU leaders that withholding aid from the region is not the solution. Penalising the people of Gaza is not the solution. It is Israel that must bear the consequences for the destruction it brought to Gaza.
“The time to act is now. The world’s revulsion against Israel’s inhumane attack on Gaza must be investigated. The EU and US must lead the way by supporting the Egyptian peace plan and encouraging the inclusion of Hamas in any peace negotiations.”