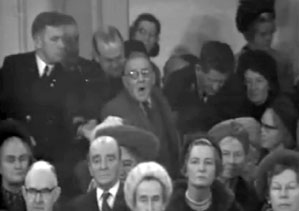 PROTEST: Joe Clarke being ejected from the Mansion House

DUBLINER Joe Clarke was one of the longest-serving republicans of the 20th century. He joined Óglaigh na hÉireann as a young man and took part in the 1916 Rising.
Clarke was among a handful of Volunteers sent by Commandant Eamon de Valera to occupy Clanwilliam House on Northumberland Road, guarding the approach to the city from Dún Laoghaire. A large force of British troops attempted to break through but they were held back by the fierce resistance of the small republican detachment. Four Volunteers were killed in the Clanwilliam House and Mount Street Bridge area: George Reynolds, Patrick Doyle, Richard Murphy and Michael Malone.
The British force could easily have bypassed Mount Street Bridge and crossed the Grand Canal at other points not covered by the Volunteers. But the British commander, General Lowe, sent wave after wave of men forward into the open, under a hail of fire, resulting in over 200 deaths. This reflected the slaughter for which such generals were responsible on a much larger scale in Flanders and all along the Western Front.

HOUSING PROTEST
Joe Clarke escaped the conflagration. As a 1916 veteran he was to play an active role in the events of the following years. He was present in the Round Room of the Mansion House as a Dáil official on the day the First Dáil Éireann met, on 21 January 1919. He survived the Tan War and the Civil War and remained staunchly republican in succeeding decades. For many years, Joe Clarke ran a ‘book bureau’, selling republican literature from a premises in O’Connell Street.
As a 1916 veteran he received invitations to attend official 26-County state functions on significant anniversaries but always refused. However, in January 1969, when he received an invitation to attend the state’s commemoration of the 50th anniversary of the First Dáil, he was persuaded by the IRA leadership to attend in order to make a protest.
The subject of the protest was the dire housing shortage in Dublin. The Dublin Housing Action Committee was campaigning on the issue and one of its members, Dennis Dennehy, was on hunger strike in Mountjoy. Hundreds of people took part in a demonstration outside the Mansion House on 21 January. Meanwhile, in Cork, housing campaigners occupied City Hall.
The main speaker in the Mansion House was President Eamon de Valera. As Dev began his speech, the veteran Joe Clarke, who walked with the aid of crutches, rose and shouted a protest:
“The Programme of the old Dáil had never been implemented. This is a mockery! There are people on hunger strike in Mountjoy. The housing of the people...”
Before he could finish the sentence, Joe Clarke was carried out of the Round Room by Dáil ushers.
In the Sinn Féin split a year later, Clarke rejected the leadership of Cathal Goulding and Tomás MacGiolla and was among those who formed the ‘Caretaker Executive’ of a reorganised Sinn Féin. He continued to attend republican events, including the 1976 60th anniversary Easter commemoration in Dublin which was held in defiance of a ban by the Fine Gael/Labour government. Joe Clarke died later that year.
1916 veteran and First Dáil official Joe Clarke was ejected from the Mansion House 40 years ago.