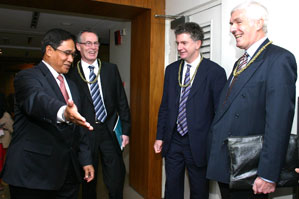 Building peace in the Philippines

I WAS INVITED to go to the Philippines on behalf of Sinn Féin by the Centre for Humanitarian Dialogue along with Jonathan Powell, who was British Prime Minister Tony Blair’s Chief of Staff for 13 years until he left office. We were asked to speak about the Peace Process in the North of Ireland and to give views from opposing ends of those talks.
Humanitarian Dialogue (HD) thought it timely as there was a breakdown of talks in the latter part of last year.
The conflict in the Philippines is mostly based in the south, in Mindanao, where there are a series of well-armed rebel forces. The most active of these has been the Moro Islamic Liberation Front (MILF), who have been on ceasefire and involved in negotiations with the government (although that ceasefire was fractured when talks broke down).
The military conflict started around the same time as it erupted in the North of Ireland in the late 1960s and the present negotiations have endured through a full decade and more.
The conflict centres around the mostly-Islamic Bangsanero people and their treatment and lack of self-determination. They argue that they are the original native inhabitants, something which is not disputed.
However, in a population of over 96 million, Muslims are only 5 per cent (a significant population mostly based in Mindanao); 80.9 per cent of the population is Catholic, with the rest being other Christian denominations.
To state that the political social and economic situation in the Philippines is complex is to understate it. The Philippine Islands became a Spanish colony in the 16th century and then a US colony in 1895.
It became a self-governing commonwealth in 1935. In 1942, it was occupied by the Japanese and eventually the Republic of the Philippines became independent on 4 July 1946.
Most people will remember something of the 20 years under Ferdinand Marcos, which ended in 1986 when a ‘People Power Movement EDSA 1’ forced him into exile and installed Corazon Aquino as president.
There were several coup attempts against her but she was replaced by Fidel Ramos in the 1992 election. The US closed its last military bases on the islands that year also. Joseph Estrada was elected in 1998 but was succeeded by Gloria Macapayal-Arrayo in January 2001 after a second upheaval under the banner of ‘People Power Movement EDSA 2’ demanded Estrada’s resignation over corruption accusations. President Arroyo was elected in May 2004 and will remain in office until May 2010.
However, I was not invited to have a political view of the above. Indeed, Sinn Féin have also made it clear that in terms of speaking to both sides on peace building and conflict resolution we would speak on our knowledge of our own situation and groups or governments may or may not find our experience useful.
In fact, the Philippines Government and the MILF had initiated an important watershed agreement known as a Memorandum of Agreement (MOA) between them in August 2007, dealing with the boundaries to the territory of Banopamoro. The breakdown in talks came when the Constitutional Court stopped the official signing after challenges had been logged with it against the MOA. The Government then announced that it would not sign. Three of the 19 commanders of the MILF then resumed military hostilities for a time.
On Wednesday morning, 14 January, we travelled across a teeming Manila to the Presidential Advisor on the Peace Process, Secretary Hermogenos Esperon, and addressed a conference of some 50 participants from Government panels on talks with various rebel groups. These groups include The National Democratic Front (NDF), Moro Islamic Liberation Front (MILF), Moro National Liberation Front (MNLF) and the Revolutionary People’s Movement (RPM).
The chief negotiators for the Government attended and afterwards we travelled to Government Buildings at Malacanang to meet with a cluster of Government ministers led by Executive Secretary Eduardo Ermita.
After that meeting we travelled by plane to Davoa in Mindanao where we stayed overnight, leaving early next morning to travel by helicopter to the region where the MILF camp in Darapanan is situated.
Unfortunately, torrential rain prevented the flight. It took a three-hour journey by road, which I can only describe as a never-to-be-forgotten white-knuckle ride.
On arriving safely (if shaken) at the camp, we had a meeting with the MILF Central Committee led by their chief negotiator Mohagher Iobac and which included a number of their commanders.
We got an excellent reception from everyone we met on all sides. Despite giving views of the history of the relationships within Ireland and between Ireland and Britain which came from completely different directions, the core message was the same:–

The dialogue in all our meetings was active and interesting for me. It was, of course, obvious that both sides were naturally cautious in case we brought the wrong or a less than strong message to the opposite side but I came away from the experience with strong indications that both sides are eager to begin talking again in earnest.
Our situation in Ireland was all too often described as intractable but after visiting the Philippines our issues were in many ways much less complex.