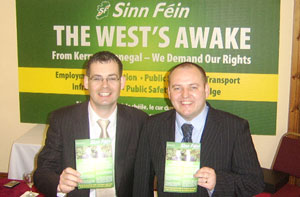 THE all-party Oireachtas Committee on Community, Rural and Gaelteacht Affairs has adopted the recommendations of a report  written by Sinn Féin Regional Development spokesperson Senator Pearse Doherty, Awakening the West: Overcoming Social and Economic Inequality.
Doherty described the development as a giant step forward for the West of Ireland and called on the Government to implement its recommendations. He said:
“I want to congratulate and thank the members of the committee for adopting this very important report into social and economic inequality in the West of Ireland. I particularly want to thank those members of Fianna Fáil, Fine Gael and the Green Party for their kind words on the report and their support for its recommendations. I am particularly glad to see all party consensus on this matter because if we are to adequately address the needs of the West of Ireland it is imperative that we set aside party politics and work together.
“This development is a huge step forward for the West of Ireland and the campaign for social and economic equality.”
The report will now be printed and sent to all Government Ministers with the full backing and support of the all-party Oireachtas Committee.
Urging Government ministers to now follow through on the report, Pearse Doherty said he intends to continue meeting people across the western seaboard to enlist support for the implementation of its recommendations.
“If this report and its recommendations are properly implemented, I believe that we will make serious inroads into addressing and reversing decades of economic and social inequality in the West.”

REPORT’S KEY ISSUES
DEPOPULATION: Rural population movement between 1926 and 2002 saw a decline of 40 per cent of the populations of Clare, Cork, Donegal, Galway, Kerry, Leitrim, Limerick, Mayo, Roscommon and Sligo.
STATE BODIES: The structuring of state institutions and delivery of public policy have also contributed to the current inequity between the regions.
JOBS: Agriculture, forestry, fishing and construction amount to 20 per cent of all employment. Each of these sectors is undergoing serious difficulties.
FISHERIES: In 2007, only 2,400 people were directly employed in fishing. Three quarters of the entire fishing workforce is located in Counties Donegal, Kerry, Galway, Mayo, Clare, and West Cork. The total catch for these fleets has declined from 390,000 tonnes in 1995 to 210,000 tonnes in 2006. The Irish fleet has declined by over 30 per cent since 1993.
IDA JOBS: In 200, just 8.1 per cent of the 9,216 new IDA-supported jobs were located in Counties Donegal, Leitrim, Sligo, Mayo, Roscommon, Clare, Limerick or Kerry. While Galway and Cork accounted for 21 per cent of these new jobs, they were concentrated in the gateways of Galway City and Cork City.
GRADUATE RETENTION: Only 38 per cent of the western region’s graduates find their first place of employment in their home counties in comparison with 79.5 per cent for Dublin.
TOURISM: The North-West has suffered a decline of 30 per cent in overseas visitors since 1999. In 2006, Clare, Mayo, Roscommon, Leitrim, Sligo and Donegal combined generated just 9 per cent of the overall tourism revenue.
ROADS: Of the 19 national road projects in construction at the end of December 2007, just two were located in the western seaboard region, amounting to only 75 out of 458 kilometres of national roads.
RAILWAYS: The Western Rail Corridor is the only major inter-regional rail project for the western counties under Transport 21 and is now at risk due to Government cutbacks. The Western Rail Corridor will cost less than €200m, compared to the Metro North in Dublin, which is estimated to cost €3.7bn.
HOSPITALS: It is projected that by 2014 there will be a further 1,698 bed closures in public hospitals in the western seaboard under its ‘Regionalisation Scenario’ and hospitals in Sligo and Castlebar are facing destabilisation and downgrading if the National Cancer Care Strategy goes ahead as planned.
SCHOOLS: Of the 396 applications from primary schools in Counties Kerry, Cork, Clare, Galway, Roscommon, Mayo, Sligo, Leitrim and Donegal, only 72 (18 per cent) have progressed beyond initial stages.
GAELTACHT JOBS: In 2007, one in eight jobs were lost in Údarás na Gaeltachta-assisted companies. The lack of employment and services in the Gaeltacht is adversely affecting the socio-linguistic environment of Gaeltacht areas.

REPORT’S KEY RECOMMENDATIONS
The report sets out a lot of detailed proposals to deal with the key issues affecting the West. The key proposals include the following:-