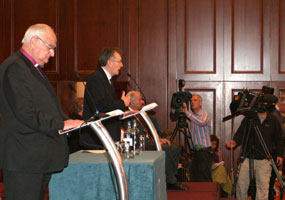 THIS week saw the publication of recommendations by the Consultative Group on the Past. The group was set up by the British Government and is co-chaired by Archbishop Robin Eames, the former Church of Ireland primate and Denis Bradley, former vice chair of the North’s Policing Board. It was tasked with finding a way of dealing with the past as a means of promoting reconciliation.
Sinn Féin President Gerry Adams MP MLA, accompanied by Jennifer McCann MLA and Francie Molloy MLA attended the launch.
Speaking after the publication Adams said:
“I want to commend the effort of the Eames/Bradley group to find ways by which the legacy of the past can be dealt with. I thank them for that.
“Sinn Féin will now take the report and reflect on its proposals. We will also discuss this matter with victims and survivors organisations and the governments in the time ahead.
“I want to deal with one issue today.
“The Consultative Group is proposing the creation of a Legacy Commission appointed by the British government.
“This is not the independent and international commission, established by a reputable international body like the UN, that Sinn Féin believes is necessary to properly address this issue.”
Gerry Adams and party colleagues, Jennifer McCann MLA and Francie Molloy MLA were also due to meet today (Thursday) with the Irish Minister for Foreign Affairs Micheál Martin in Belfast. The meeting will allow the family of Damien Walsh, a 17-year-old who was killed by the UDA in March 1993 and the Ballymurphy Massacre Victims Group whose relatives were killed by the British army in August 1971, to meet the Minister and raise their concerns with him.

VICTIMS’ GROUPS
Sinn Féin’s call for an independent international truth commission had been reiterated by families and campaigners for victims. In a joint statement, released prior to the publication of the recommendations, a number of groups said that current arrangements offered “no realistic prospect of truth recovery for bereaved families”.
The statement was endorsed by groups including Relatives for Justice, the Pat Finucane Centre, An Fhirinne, Ardoyne Commemoration Project, Firinne and Justice for the Forgotten.
“We believe that the only way to bring truth to the greatest number of families is through an international independent truth commission,” read the statement.
The joint statement pointed towards International law, which makes the case that states, undergoing transition, are faced with certain legal obligations, “including the provision of independent investigation of past violations, upholding victims’ rights, providing adequate reparations to victims, preventing abuses and preserving and enhancing peace”.
“We believe that an independent truth commission provides the best opportunity for truth recovery for the greatest number of those affected by the conflict. We believe this will contribute to individual and societal healing and recovery, dealing with the legacy of the past in a positive way and building a better future for everyone,” said the victims’ support groups.
Earlier in the week, Robin Eames and Dennis Bradley had travelled to London to brief the British Prime Minister, Gordon Brown prior to launching their recommendations at a press conference in Belfast’s Europa Hotel on Wednesday.
The authors have urged people to take time to read what is a detailed and complex report outlining 30 recommendations and running to 190 pages. And, as the saying goes, the devil is in the detail and in the coming weeks the families of victims, campaign and support groups and political parties will be scrutinising that detail.

CHAOS AT LAUNCH
Up to 25 loyalists lead by Jim Allister, Willie Frazier and Cedric Wilson brought chaos to the launch of the Eames Bradley report in the Europa Hotel.
Allister, who broke away from the DUP and now leader of the micro Traditional Unionist Voice party along with Frazier of the so-called victims group FAIR lead their followers into the hall where the launch was taking place and stood in front of the stage.
Among the group was serial unionist protester Cedric Wilson.
As the loyalists, including one collarette clad Orangeman, gathered around the stage nationalists who were attending the launch challenged the protesters to acknowledge the legitimacy of their relatives who were killed by the State and by loyalist killer gangs.
Indeed when a member of the Ballymurphy relatives pointed out that the British army killed 11 people in the area in August 1971, including a Catholic priest, Frazier retorted that, “he must have been a gun runner”.
Another protester told the sister of a man in Ballymurphy that her brother, “got what he deserved”, and referred to priests as, “paedophiles”.
Derry man Danny Bradley, whose brother Seamus was an IRA Volunteer killed on active service in 1972, confronted Frazier telling him that he, Bradley, had every right to be treated in the same way as anyone else who lost a relative.
Earlier in 1972 Bradley’s brother Robert was killed when his car was struck by a British army vehicle while a third brother was shot in the neck by a British soldier but survived.
As the loyalists moved to the side of the conference room when the press conference was about to start the loyalists spotted Sinn Féin President and surged towards him hurling abuse.
It wasn’t until a representative of the Eames/Bradley group warned the trouble makers that the PSNI would be brought in that a semblance of calm descended on the proceedings.
However at intervals during Robin Eames and Denis Bradley’s presentations Cedric Wilson in particular jumped to his feet to shout insults at the co-authors of the report and Adams.
Speaking to An Phoblacht afterwards Mark Thompson of Relatives for Justice accused Jim Allister and Willie Frazer of, “instigating the disruption and exploiting people’s” grief. There were people there who have lost relatives and they have the right to their say. However it is clear that Willie Frazier and Jim Allister used those people’s feelings for their own ends”.