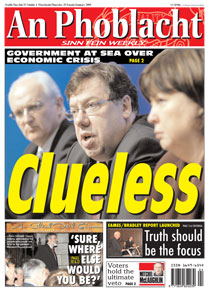 Government at sea over economic crisiS

THE Dáil returned after its long Christmas recess this week to debate the dire state of the Irish economy. But the debate was a farce before it began because Taoiseach Brian Cowen refused to publish or share with the Opposition the Government’s framework document which is the basis of their crisis talks with the unions and the employers.
Challenging the Taoiseach on this on Tuesday, Sinn Féin Dáil leader Caoimhghín Ó Caoláin said:
“The Taoiseach circulated a framework document to the social partners today but members of this House are not being given access to the content and detail of that framework document. In the absence of that information, we are being asked to participate without the information necessary to inform their participation.”
Earlier, Deputy Ó Caoláin told reporters that Sinn Féin would be challenging the Government’s handling of the economy as well as putting forward the party’s own constructive proposals for recovery.
Sinn Féin Economy spokesperson Arthur Morgan spoke in the Dáil debate on Wednesday. He said during his speech:
“In the past four weeks we’ve seen Dell announce 1,900 job losses with a further 4,000 related jobs set to go, 300 people have been let go at Kostal; 400 workers have been made redundant in Dundalk. Only last Monday it was announced that 750 workers in Ulster Bank will be left without a job.
“While this is all happening the Government is doing nothing. The only single noticeable measure that this Government has taken have been to bail our their greedy property developing friends and the banking sector.
We are now at a stage that almost 300,000 people are on the job seekers benefit and by Minister Hanaffin’s own admission staff in welfare offices are ‘working flat-out’ to process welfare applications.

NO CLEAR PLAN OF ACTION
“But while our dreadful economic circumstances are as clear as daylight, the Government’s plan of action is as clear as mud. Over the last four months we have seen one woolly document after the another proposing nothing and leading to nothing; the Government has done a u-turn on almost every decision it has made and our own Minister Lenihan and the so-called excellent people at the Department for Finance have got nearly every estimate they’ve made completely wrong.
“We had been led to believe that the Stimulus Package produced last December would provide us with a clear path. But instead we got a flimsy discussion document long on waffle and short on ideas. Despite the criticisms from all quarters, the latest framework document headings which were presented by the Department of Finance in the negotiations with the social partners have been described as ‘vague’ and ‘blancmange’. According to reports this document did not even mention public sector pay cuts – despite the Minister for Justice stating only last Monday that nothing could be ruled out.”
“Our Minister for Finance unbelievably claimed last week on BBC newsnight that our ‘economy is vibrant’. Well I’m sure if the Minister was bothered to listen to the 5,000 Irish workers who are losing their jobs every week, I think he would tell a different story on our so-called thriving economy. It is this type of bull from the Government and senior officials in the banking sector that is making it far more difficult to get to grips with our dire circumstances that we are in.”
Deputy Morgan called on the Government to re-take State control of the Corrib gas resources and to renationalise Eircom. Calling for a state bank, he said:
“This means the nationalisation of a major banking institution that deals with credit for SMEs, that can restructure mortgages to protect families from loss of their homes and that can give confidence back to the Irish people and workers who have the skills and knowledge to get us out of the economic turmoil. This means renationalising Bank of Ireland or AIB – not Anglo Irish. For economic renewal and to secure our public finances the public will have to come first and the property developers will have to come last.”