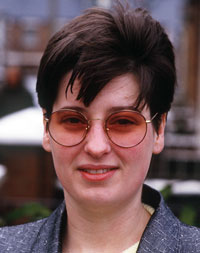 SEVERAL HUNDRED mourners attended the funeral in County Down of former Sinn Féin Councillor Geraldine Ritchie, who passed away on 11 January following a long illness.
Republicans from across south Down and beyond travelled on a cold Tuesday night to Downpatrick, where Geraldine’s remains were carried from her home in Bishop’s Brae Avenue to St Colmcille’s Church for Requiem Mass.
Sinn Féin Councillor Éamon Mac Con Midhe expressed the party’s regret at Geraldine’s passing.
“Geraldine Ritchie made an important contribution to the development of Sinn Féin in Downpatrick and south Down.
“She was elected as a councillor in 1985 during a time when Sinn Féin’s electoral intervention was in its infancy.
“The first Sinn Féin councillor to take a seat in Downpatrick since the 1920s, she did so at a time when republicans lived under the constant threat of assassination from unionist paramilitaries.
“It was her leadership and hard work that ended the flying of the Union Jack from properties owned by Down District Council.
“To the background of threats and intimidation that created many difficulties for her in carrying out normal constituency work, Geraldine showed courage and won the admiration of many, including her political foes.
“It was of no surprise to those who knew her that she later became a paramedic with the Ambulance Service because Geraldine was happiest when she was helping people in need.

REMAINED ACTIVE
“Although she did not take a prominent public position in recent years, she remained active in the party and continued to play an important role in the growth of Sinn Féin in the Downpatrick area until she became ill.
“Geraldine will be remembered for her contribution to Sinn Féin and by her constituents who recall the hard work she did to better the lot of the underprivileged.
“On behalf of Sinn Féin, I would like to send our sympathy to Geraldine’s family who are in our thoughts at this difficult time.”
Geraldine was given a republican funeral by her comrades.
She is survived by her husband Tommy, children Caroline, Thomas and Stephen and her grandchildren.
An Phoblacht
44 Parnell Sq.
Dublin 1
Ireland