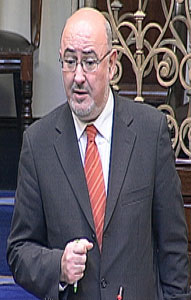 THE Irish Government held an official commemoration to mark the 90th anniversary of the convening of the First Dáil in Dublin’s Mansion House with a special sitting of the Dáil on Tuesday of this week, the day before the actual anniversary. The Government’s error in failing to book the Mansion House for the date itself, 21 January – Sinn Féin had booked the Mansion House – was compounded by its spurning of an offer from Sinn Féin to accommodate a truly representative all-Ireland event – as the First Dáil was!
The Dáil sitting on Tuesday was addressed by Sinn Féin Dáil leader Caoimhghn Ó Caoláin.  During the course of his address, Ó Caoláin quoted the words of a young republican, Máire Comerford, who was present in the Mansion House 90 years ago: “Never was the past so near, or the present so brave, or the future so full of hope.”
He said Comerford shared with her generation the sense of their historic mission, their selfless courage and their faith in the potential of the Irish people to flourish in freedom.
“They were inspired by the ideals of the men and women of Easter Week 1916. Their sights were set on the Irish Republic proclaimed in arms on the streets of this city. They had seen the executions of 16 of their comrades by the British Government. They had seen hundreds of people interned without trial in the aftermath. They had experienced British military rule. And the men and women of that generation gave their answer to imperialism by rallying to the flag of Sinn Féin.”
He pointed out that the British Government tried to impose conscription into the British Army on the Irish people in 1918 and that it was met by the determined resistance of a people’s movement.
“In April 1918, the one-day ‘General Strike Against Conscription’, led by the Irish Trade Union Congress, dealt the fatal blow to the British Government’s plan. It is appropriate that we remember here the legacy of the Irish Transport and General Workers’ Union which this month celebrates its centenary. It played a pivotal role in the struggle for national independence, workers’ rights and socialism in Ireland.”
The Sinn Féin Dáil leader also pointed out:
“It was an all-Ireland Dáil that assembled here, a Dáil united in opposition to the intention of the British Government to partition Ireland. We know the tragic outcome. Dáil Éireann was suppressed by the British Government which waged war on Irish democracy. Our country and our people were divided and the mass movement so strongly manifested here in January 1919 was split apart in January 1922.
“We salute all those who struggled for Irish unity and independence since the First Dáil Éireann met. We recall all those who suffered imprisonment and who gave their lives in the struggle for freedom, as so many of the first Teachtaí Dála did. No one can credibly deny the spirit of freedom that links, to take but two examples, the Lord Mayor of Cork, Terence MacSwiney, TD for Mid-Cork who died on hunger strike in 1920, and the TD for Cavan/Monaghan, Kieran Doherty, who died on hunger strike in 1981.”
Ó Caoláin said that after nine decades the Democratic Programme of the First Dáil remains to be implemented.
He said that if, over the past decade, the public right and welfare had been placed above the interests of private profit and property, as the Democratic Programme had said, the Irish economy would not now be in recession.
“No government truly committed to the sovereignty of the people over all the resources of the nation and their development for the benefit of the people would have given away the massive Corrib gas reserves off our west coast.
“And a government taking seriously the duty to ensure that ‘no child should suffer from poverty’, that all should ‘share in the nation’s wealth’, and that ‘the health of the people should be safeguarded’, would never preside over the inequality and division in Irish society today.”
The Cavan/Monaghan TD said the hopes of subject peoples across the globe, including the Irish people, were dashed as the British and French empires reasserted their control after the First World War:
“Those two powers divided the Middle East between them and ensured continuing Western domination of the region. We see the terrible legacy today in the region’s many conflicts and I take this opportunity to extend solidarity in particular to the dispossessed people of Palestine whose agony the world has witnessed in recent weeks.
“Our purpose today should not be simply to commemorate. The work begun on 21 January 1919 remains unfinished. Today should provide an opportunity for all of us to reflect on the need to end the division of our country and of our people. We are all mandated to work, by peaceful and democratic means, to bring about the unity of Ireland.
“We in Sinn Féin hold that as our central task. We take very seriously the need to address the fears and apprehensions of unionists. Our engagement with that community is very real and is ongoing. For the first time, republicans and unionists are sharing power in the north-east of our country. The Good Friday Agreement is working, though much remains to be fulfilled. There is a new political dispensation. We have moved beyond the conflict of decades and have built a peaceful path forward. For us, that path leads to a democratic Ireland, a nation built on unity and equality.
“As we mark the 90th anniversary of An Chéad Dáil Éireann, we look forward to the day when the elected representatives of all the people of our country will once more gather in the national assembly of a united Ireland.
“Creidimíd go dtiocfaidh an lá sin agus is ar a shon atáimíd ag obair. Is é sin ár gcuspóir. Is é sin an dóchas a bhí anseo 90 bliain ó shin agus atá fós ann. Agus is é sin an bealach ar aghaidh do phobal na hÉireann uile.”