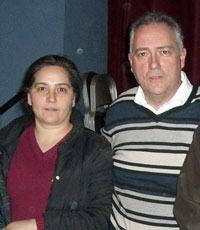 OVER 200 people attended a special screening of Steve McQueen’s award-winning film, Hunger, in Hackney, east London, on 17 January. The screening was followed by a discussion led by republican former political prisoner Seanna Walsh, who spent 21 years in Long Kesh between 1973 and 1998.
Seanna, who now heads Sinn Féin’s Culture Department, argued that the decision taken by the British state in 1976 to end political status was part of a clear strategy to criminalise the republican struggle, with the British Government seeking to discredit the legitimacy of the aims of Sinn Féin amongst both British and Irish public opinion. However, the strength of public support for the Hunger Strikers – shown in particular by the election of Bobby Sands as MP for Fermanagh/South Tyrone during the Hunger Strike – meant their five demands were conceded by the British Government despite their refusal to formally recognise political status.

POLITICAL FORCE
Bobby Sands’s election was also held up as a key turning point in the Republican Movement, and the development of a political strategy incorporating electoral campaigning. The success of this ultimately meant Britain had to abandon its criminalisation strategy and recognise Sinn Féin as a legitimate political force to be negotiated with. Tony Blair’s willingness to sit down with Sinn Féin to negotiate the Good Friday Agreement was acknowledgment of this political reality.
The discussion also touched on the conflict in Gaza when an audience member asked what lessons could be learned from Ireland. Seanna Walsh made the case that any solution required political pressure on Israel to commit to non-military means and a willingness to negotiate with Hamas as the elected representatives of the Palestinian people.
An Phoblacht
44 Parnell Sq.
Dublin 1
Ireland