Che: Behind the icon 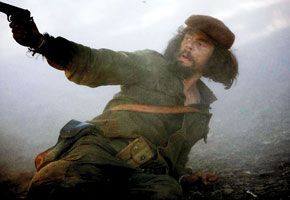 AS the trailer to Steven Soderbergh’s two-part biopic on Ernesto ‘Che’ Guevara states, this is “the epic story of the man behind the icon”. It has been aptly released this month to coincide with the 50th anniversary of the Cuban revolution.
As Walter Salle’s excellent Los Diarios de Motocicleta (The Motorcycle Diaries) almost perfectly captured Che’s earlier years, it was a logical step for Soderbergh to follow on from there and focus on Che’s pivotal role in the Cuban Revolution and in the second part his ultimately doomed Bolivian experience. As the director says: “Somebody did Act One for us.” The basis for this film is Che’s Reminiscences of the Cuban Revolutionary War, and after seven years of research the film is slick, entertaining and captivating.
The sole criticism I would have of the film is that, for the non-political audience, it is largely bereft of background information. Unfortunately, while a lot of people are familiar with Che, the T-shirt and poster icon, they are clueless about Che the man and Marxist revolutionary.

UNCANNY LIKENESS
The lead actor is Puerto Rican Benicio Del Toro, who was instrumental from the start in making this film happen. Bearing an uncanny physical likeness to Guevara, with his piercing eyes and serious countenance, he really brings Che to life. Demián Bichir has Castro down to a tee, with his charisma, gesticulation and even the famous protruding wagging finger of El Comandante en Jefe.
Soderbergh employs colourful wide-screen to portray Cuba and newsreel monochrome to cover Che’s 1964 speech to the UN in New York, which results in a feeling that you are watching genuine archive footage. Che is akin to a movie star while in the United States but never loses his revolutionary spirit, sarcastically expressing gratitude for the Bay of Pigs invasion to an American political sycophant who greets him at a party.
The first part covers the now historic initial meeting between Fidel and Che in an apartment in Mexico with not a beard between them. After the sailing of the Granma boat to Cuba, it then chronicles the three years of the Cuban Revolution.
Here Del Toro excels as Che, showing his leadership qualities commanding and disciplining his troops; his unswerving bravery leading by example from the front line; his empathy towards the plight of poor campesinos (peasants); his determination in struggling with his debilitating asthma; his passion for education and instructing companeros to learn to read and write and also his ruthlessness in executing former comrades who broke sacred revolutionary codes.

THE BEARDED ONES
The film follows Los barbudos (the bearded ones) far up into the Sierra Maestra, through the verdant and sticky terrain of the Cuban countryside. Che’s future wife, guerrilla Aleida March, is played by Catalina Sandino Moreno and appears captivated by Che and his revolutionary zeal, persistent on helping the cause.
The first part climaxes with the defining battle at Santa Clara where the guerrillas overpower Batista’s troops to secure the success of the revolution and finally the glorious victory parade back into the capital Havana.
Even after the jubilation on the way to Cuba’s capital, Che maintains his revolutionary discipline reprimanding fellow guerrillas under his command for ‘expropriating’ a former Batista general’s flash automobile, insisting they take it back and travel in a guerrilla jeep, insisting that the revolution does not steal.
Hasta la segunda parte!